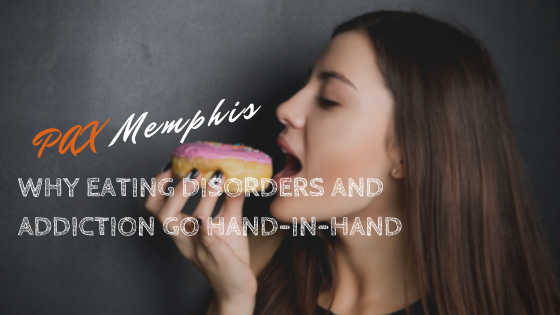 Addiction and eating disorders commonly co-occur. Substance abuse may begin before or after an eating disorder manifests, but both disorders make each other substantially worse. Regardless of which came first, these disorders wreak havoc on the mind, body, and soul. As a result, those struggling with co-occurring addiction and disordered eating should seek treatment immediately.

The Link Between Eating Disorders and Substance Abuse

While people usually know that mental illness and drug abuse are associated, eating disorders are far more subtle. However, addiction and disordered eating share many of the same risk factors, such as:

In addition, some of the symptoms of eating disorders and substance abuse are the same. For example, people with disordered eating or addiction may display compulsive behavior, mood changes, and isolation.

Eating disorders are about far more than food – they are complex health conditions that usually require professional intervention. Nearly 20 million women and 10 million men experience an eating disorder at some point in their life. The following includes 3 of the most common types of eating disorders that people suffer from.[2]

People with this condition usually view themselves as overweight. In reality, they are severely underweight. Anorexia nervosa involves the dangerous restriction of food. Aside from starvation techniques, the disorder can cause obsessive-compulsive symptoms, extreme fear of gaining weight, obsession with exercise, and a distorted body image.

People with bulimia nervosa eat large quantities of food, also known as binge eating. During a binge, a person may have little to no control over how much they eat. Then, individuals with bulimia purge their food to get rid of calories and relieve discomfort from overeating. These individuals may have low self-esteem, take laxatives or enemas, and have a fear of weight gain.

Binge eating disorder is one of the most common eating disorders in the U.S. People with this condition eat large amounts of food in short periods of time. These individuals experience a lack of control over how much they eat. Individuals may eat when they are full, hide their food, and feel guilty about their eating habits.

Most eating disorders start with an unhealthy obsession with body image, food, or a range of psychological conditions and develop during adolescence or young adulthood. As a mental health condition, professional treatment is usually required to overcome disordered eating.

The Role of Substance Abuse on Disordered Eating

Due to the lack of control and the obsessive component of disordered eating, it is easy to see how eating disorders and addiction commonly co-exist. When people with eating disorders have trouble coping with their emotions, such as fear, guilt, shame, or insecurity, they may turn to drugs or alcohol to cope. Substances may seem like a quick-fix. However, this can become a dangerous habit.

In addition, some substances have specific side effects that appeal to people who suffer from disordered eating. Stimulants, like Adderall, cocaine, and methamphetamine, are known to suppress the appetite and aid in fast weight loss. Many people who suffer from eating disorders will either do everything to avoid eating or will do anything to try and stop binge eating. When they find out that stimulants seem like the answer to their prayers, many indulge. However, this is a dangerous habit. Not only can it lead to addiction, but it can cause detrimental damage to the body.[3]

Alcohol is also popular among people with eating disorders. It is so popular that it has its own slang term – “drunkorexia.” The term refers to eating patterns that involve weight control methods to compensate or offset the calories consumed while binge drinking. Similarly, many people who suffer from disordered drinking also experience anxiety. For some, alcohol can provide short-term relief from anxious thoughts. People who grow worried about their eating habits may calm their nerves with alcohol.

Combining substances and disordered eating can change brain chemistry in dramatic ways, causing both an addiction and an eating disorder to spiral out of control. It can also lead to devastating and potentially fatal health consequences, from malnourishment to overdose or starvation.

Recovery from Addiction and Disordered Eating

Living with addiction and disordered eating isn’t easy. While self-medicating may seem like the answer at first, substance abuse inevitably makes everything worse. Both conditions can cause much distress and damage. However, people who suffer from these conditions can get better with professional help. Many drug and alcohol rehab centers offer co-occurring disorder treatment that addresses both disorders. Get the recovery process started today by contacting an addiction specialist near you. You don’t have to hide one disorder or ignore it – you can treat and recover from both.