Signs Someone is Shooting Up Drugs

Home » Blog » Signs Someone is Shooting Up Drugs 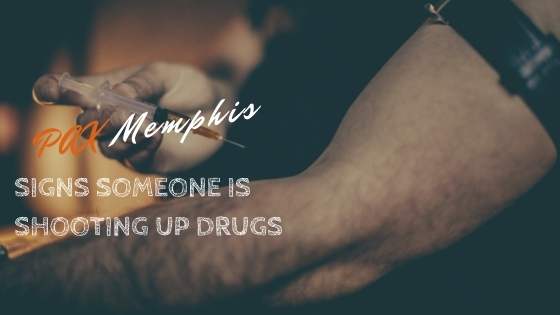 Shooting up drugs is one of the most dangerous ways to abuse substances. Intravenous (IV) drug use not only produces a stronger, faster high, but it also increases the risk of overdose, infection, addiction, dependence, and death. By knowing how to identify whether or not someone is shooting up drugs, you may be able to stop a drug addiction before it gets worse.

The World Health Organization (WHO) estimates that 13 million people globally are IV drug users. Of those 13 million, 1.7 million are also living with HIV – a chronic condition that is easily transmitted by needle-sharing.[1] The fast-acting effects and potent highs produced by IV drug use are what make it so appealing to drug users – but not without great risk.

Why Do People Inject Drugs?

For someone who isn’t addicted to drugs, it can be difficult to imagine why someone would inject drugs in the first place. However, for frequent drug users, it is a no-brainer.

When you swallow a pill it can take anywhere from 15 minutes to one hour for the drug to take effect. When you crush and snort a pill, on the other hand, the effects occur much faster. IV drug use is the fastest way to feel the effects of a substance – and the effects tend to feel much stronger, too.

Someone who has been abusing opioids for several years may begin using the drug by swallowing pills. After a few months, they may notice their tolerance increasing, causing them to use more and more pills. However, prescription opioid addiction is a costly habit, so many users will begin crushing and snorting the drugs to produce a stronger, faster high.

Then, after snorting drugs for some time, a person’s tolerance will continue to increase. They may desperately seek out another way to achieve the same high they have achieved in the past. As a result, some drug users turn to shooting up because it produces a rapid and potent high.

How To Tell if Someone Is Shooting Up

There are many different types of drugs that people inject and their behaviors while under the influence of these drugs may vary. For example, someone who injects heroin may appear sleepy and tired while someone who injects meth will appear energized and alert.

However, there are many physical signs of IV drug use that will let you know someone is shooting up.

Common physical signs of shooting up include:

There are also behavioral signs to keep an eye out for as well. Keep in mind that these symptoms may also apply to snorting or smoking drugs as well as injecting.

Track marks are the most common sign of shooting up. “Track marks” is a term used to describe areas of scarring and discoloration that appear along a vein that has sustained damage due to IV drug use. They are usually found on a drug user’s dominant arm. Although track marks are most often located on the forearms on the inside of the elbow, they can develop anywhere on the body where a person is shooting up drugs.

When veins become too damaged or scarred, drug users may begin shooting up in their hands, feet, legs, groin area, or neck. Regardless of where a person is injecting at, the marks will look fairly similar. Depending on a person’s skin color, fresh needle puncture wounds will appear bright red and pink. They may seem irritated or inflamed at the injection site or even be covered by a scab or scar tissue. New track marks may also look like fresh bruises.

Older track marks, or ones that have healed, will look like a white or light-pink scar covering the injection site. If the vein beneath the mark becomes damaged, as well, the vein may take on a darker appearance that is noticeable under the skin.

Track marks usually appear in long, skinny shapes that cover the area over a vein. However, they may also look like smaller, round, or oblong scars.

If you notice track marks on your loved one’s arm, it is a tell-tale sign that they are shooting up and may need help for substance abuse.

The Dangers of IV Drug Use

IV drug use is particularly dangerous and comes with many risks. The first is the risk of developing a substance use disorder. While shooting up drugs produce an intense and rapid high, that high can also fade quickly. When the effects of substances wear off, drug users may crave these effects and use the drug again and again. Repeatedly abusing substances almost always leads to a physical and psychological addiction.

Another major risk associated with IV drug use is the risk of overdose. Not only do the effects set in within seconds after injection, but it is difficult to determine exactly what dose a person is taking. In addition, many drugs are cut with additives and fillers that can be dangerous when injected. IV drug use causes all of the dose to hit a person’s system at one time, and if they have taken too much of a certain substance, it can reach toxic levels in their body and lead to an overdose.

Additional long-term health risks and side effects associated with iV drug use are:[2]

If you have noticed these signs in a loved one and suspect they are shooting up drugs, it may be time to confront your loved one or consult with an addiction specialist. IV drug use is highly addictive and it can be deadly, so time is of the essence. Don’t wait any longer – call now to get help for addiction or to learn more about our evidence-based addiction treatment and drug rehab programs.