Opioids From Strongest to Weakest 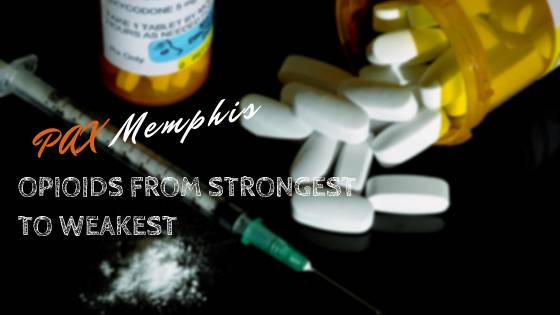 Opioid addiction has dominated news headlines and flooded the treatment industry in the last few years. The problem is so severe that approximately 130 people die each day from an opioid-related overdose. Additionally, in 2017, 1.7 million people in the United States were addicted to prescription opioids and approximately 652,000 suffered from heroin addiction.[1]

Even though many of the opioids on this list can be prescribed by a physician, it doesn’t mean that they are safe. In fact, all opioids are highly addictive when abused. Despite the high potential for abuse, the CDC reports that in 2017, the average opioid prescribing rate was 58.7 prescriptions per every 100 people.[2]

Most opioids are controlled substances that have a high potential for abuse. When abused, a person’s tolerance increases and the body requires more and more of the drug. Then, the body becomes physically dependent on the drug to avoid going into opioid withdrawals. However, not all opioids are the same. Here are the most common opioids of abuse, listed from strongest to weakest.

Fentanyl is among the strongest and most dangerous opioids. It is 50 times more potent than heroin.[3] It is a synthetic opioid that is often prescribed after surgery to treat severe pain. However, it has become a very popular street drug of abuse. Due to its low cost and extremely high potency, street dealers often mix fentanyl with heroin, which can easily result in a fatal overdose. If a person with little to no tolerance to opioids consumes the smallest amount of the substance, they are at serious risk for overdose.

Heroin is derived from morphine and is the second strongest opioid. Although most opioids have a medical purpose – heroin does not. It is an illegal substance with a very high potential for abuse.

Whether it is sold as a sticky black substance or a white or brown powder, heroin rapidly enters the bloodstream and causes intense feelings of euphoria. Regardless if it is snorted, injected, or smoked, it is extremely dangerous and can result in an overdose. Heroin is particularly dangerous because it is manufactured in clandestine laboratories. Sometimes, it is cut with fentanyl or other dangerous substances. It can be difficult to tell exactly what chemicals are in different batches of heroin until it is too late.

Hydromorphone, or Dilaudid, is prescribed as a pain reliever for severe pain. Since it is significantly stronger than morphine, it produces relaxation and extreme sedation. The drug can be dissolved and injected, causing instant effects similar to those of heroin. Consequently, many people who suffer from an opioid use disorder will use hydromorphone as a substitute for heroin.

Oxymorphone is sold under the brand name Opana. Although it has medicinal use in treating moderate to severe pain, it still has a high potential for abuse. It is usually dispensed in pill form, however, it also comes as a liquid made for injection.

Those who abuse oxymorphone might swallow the pills, snort them, or inject them. They can also be obtained illicitly on the street.

Methadone is strictly regulated because it is prescribed to treat opioid addiction and to help reduce opioid withdrawal symptoms. Methadone can be swallowed or injected. However, abusing methadone against a physician’s orders is illegal. After all, it has a similar chemical structure to that of morphine and heroin. In addition, it can make users feel euphoric and sedated.

Since methadone is used to treat opioid use disorders, some may believe that the drug is safe. Unfortunately, this is not the case. When methadone is abused, users are at risk of overdose and other adverse health reactions. Methadone should only be used under careful professional supervision.

Next on the list of the strongest opioids is Oxycodone. Oxycodone is sold under the brand names Percocet, Roxicodone, and Oxycontin. It is one of the most common opioids that is prescribed to treat moderate to severe pain. Despite the fact that it is prescribed often, it still has a high potential for abuse due to its calming and sedating side effects.

Morphine is derived naturally from the poppy plant. Even though it is not synthetic, it is still potent. The potency of morphine is similar to the potency of Oxycodone. It is usually prescribed in the place of other opioids if they are ineffective at treating pain. Morphine can be swallowed or injected, although injection is preferred among people who abuse it due to the near-instantaneous effects it can produce.

Hydrocodone is similar in potency to morphine and oxycodone. It is, by far, the most commonly prescribed opioid medication in the United States. In 2017, approximately 83.6 million hydrocodone prescriptions were dispensed.[4] Additionally, there are staggering rates of hydrocodone diversion, street use, and polydrug abuse including drinking while under the influence of hydrocodone. In many instances of hydrocodone addiction, users will graduate to using stronger, more potent opioids.

Codeine is commonly found in a prescription cough syrup that is used to reduce coughing. However, it can also be prescribed to treat mild to moderate pain when it comes in tablet form combined with Tylenol. Although it is weaker in potency than many other opioids, it still has a potential for abuse.

Meperidine, or Demerol, was the first synthetic opioid to hit the market. It is weaker than the previous opioids on this list, but it still has a potential for abuse. Despite the fact that meperidine isn’t as potent as some opioids, physical dependence, and tolerance to the drug develops far quicker than some of the stronger opioids. As a result, it can be just as dangerous as the other opioids on the list.

Tramadol is sometimes dispensed under its brand name, Ultram. Tramadol is similar in potency to meperidine, but it is less dangerous because there is a lower risk of tolerance, physical dependence, and abuse. Even though it is the weakest opioid, it can still be abused and can lead to addiction.

Regardless of what type or potency of opioids is abused, there is always a risk for addiction. Unfortunately, approximately 80 percent of heroin users report that they began using prescription opioids before moving on to heroin.[5] It is evident that opioid abuse is dangerous, and can be deadly.

Fortunately, recovery from opioid or painkiller addiction is possible. The best first step to take is to seek addiction treatment from a drug rehab near you.