Is Your Loved One Abusing Cocaine?

Home » Blog » Is Your Loved One Abusing Cocaine? 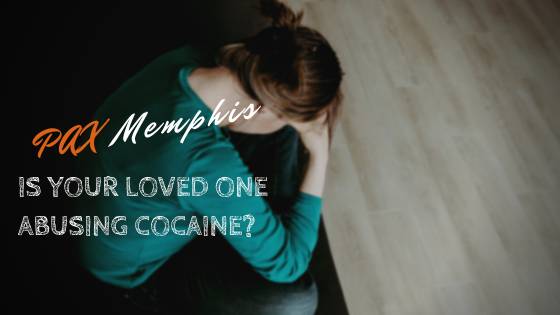 Cocaine is a highly addictive stimulant. Although it is popular among nightclubs and party scenes, it can be extremely dangerous when abused. A person who is addicted to cocaine may not leave their drugs sitting around for anyone to see. Instead, he or she may go to extreme lengths to hide drug use. However, there are signs you can watch out for to confirm your suspicions that a loved one is abusing or addicted to cocaine.

Signs a Loved One is High on Cocaine

When a person takes cocaine, it increases the levels of dopamine, serotonin, and norepinephrine in the brain. These neurotransmitters affect the reward system of the brain by producing feelings of well-being. As a result, a person’s energy will increase and he or she will feel a wave of euphoria. [1] Under variable circumstances, a person may be unable to hide these effects. Cocaine also impacts many organ systems, causing physical, mental, and emotional changes to occur while under the influence of the drug.

Some signs that a person is high on cocaine include:

If your loved one is exhibiting any or all of these signs, he or she may be high on cocaine. However, the signs that someone is under the influence of cocaine can closely mimic those of other stimulants. If you suspect that a loved one is abusing cocaine, it is important to also know the signs of cocaine addiction and the long term effects of cocaine abuse.

Finding drug paraphernalia among a loved one’s personal items is a clear indicator of substance abuse. Cocaine can be consumed in several ways and can involve many items used while taking the drug. The most common form of cocaine use is snorting, but it can be smoked or injected as well. If you find rolled-up dollar bills, syringes, needles, razor blades, or flat mirrors or plates with powder residue on them, it is a tell-tale sign that cocaine is being used.

Cocaine addiction can also lead to physical dependence on the drug. Consequently, when a person who is dependent on cocaine abruptly quits using the drug, he or she will experience withdrawal symptoms. Fortunately, cocaine withdrawal is usually not fatal. At most, it is extremely uncomfortable.

Signs of cocaine withdrawal include:[2] 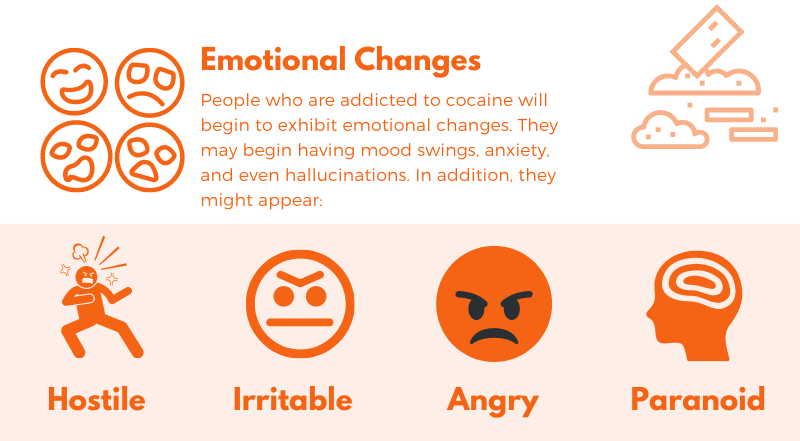 If a person is addicted to cocaine but stops suddenly, he or she may appear depressed, anxious, and stressed. If confronted about cocaine use, a person may begin rationalizing or denying that he or she has a problem. Similarly, a person might blame other people for an event or change the topic of conversation. When addiction progresses, it can become more and more difficult for people to control their emotional nature, causing troubles within work, relationships, and other obligations.

When cocaine is abused for an extended period of time, the brain begins to adapt to the drug. The reward pathways will be rewired and a person will need increasing amounts of cocaine to get high. Similarly, a person will also experience worsening withdrawal symptoms when the drug is not taken. After long term cocaine abuse, a person may experience a severe decline in his or her mental health and begin struggling with day to day activities.

Long term cocaine abuse affects many other organs in the body as well. It can cause ulcers and tears in the gastrointestinal tract, malnourishment, and significant weight loss. In addition, cocaine has severe effects on the cardiovascular system. Many long term cocaine users find themselves in the emergency room due to chest pain, strokes, and aortic ruptures as the inflammation of the heart muscle occur and the heart struggles to contract.

Lastly, long term cocaine abuse is linked to an increased risk for seizures and neurological problems, such as hemorrhages, memory loss, Parkinson’s disease, and a general decline in cognitive functioning.[3] The only way these long term effects of cocaine abuse can be avoided is through complete abstinence.

If your loved one is suffering from cocaine addiction, it is vital that he or she gets help as soon as possible. Drug rehab for cocaine addiction is the first step towards recovery. To learn more about drug rehab, contact the addiction professionals at PAX Memphis Recovery Center today.