The Dangers of Mixing Benzodiazepines and Opioids 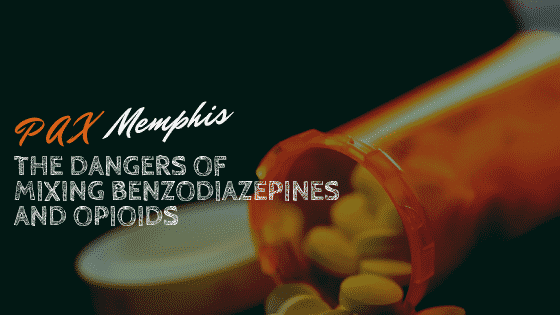 Medical professionals have long warned the public about the dangers of polydrug use. Many people are aware of the dangers of mixing drugs like benzos and alcohol, but there is a rising trend of people engaging in polydrug use involving drugs like Xanax or Valium with Oxycodone or other opioids. Benzodiazepines and opioids are both central nervous system depressants with a high potential for abuse. While both drugs can be dangerous and addictive when misused alone, mixing the two is particularly risky.

Benzodiazepines are tranquilizers that are used to treat disorders like anxiety, panic disorders, seizures, and insomnia. In some cases, they are used for general anesthesia, alcohol withdrawal, sedation, or as a muscle relaxant. They include pharmaceutical drugs like Xanax, Valium, Klonopin, Librium, Restoril, and Ativan. In 2017, 11,537 overdose deaths were due to the abuse of benzodiazepines.

Opiates, or opioids, are used primarily as pain killers. Opioids are derived from the poppy plant and work by reducing pain signals being sent to the brain. This class of drugs includes pharmaceuticals like Vicodin, Dilaudid, morphine, codeine, and oxycodone, as well as illicit street drugs like heroin. Opioids are particularly deadly because they have a high potential for abuse, and tolerance for opioids can develop rapidly. Approximately 130 people die from a fatal opioid overdose each day.

Effects on the Body

While both substances have therapeutic purposes when taken as prescribed, misusing them together can negatively affect one’s health. Benzos and opioids are two of the most abused drugs in the United States. Both drugs are central nervous system depressants that act by reducing brain activity and other vital functions, such as respiration rates. Most medical professionals are extremely cautious about prescribing the two drugs simultaneously, but many individuals disregard the warnings and misuse these drugs anyway.

Opioids and benzodiazepines have overlapping side effects. Some side effects that may occur as a result of either class of drugs include drowsiness, lethargy, confusion, and respiratory depression. If these substances are abused together, these side effects can be exacerbated.

If a person is addicted to opioids, their tolerance will begin to increase, causing their body to crave more and more of the drug to produce the effects they want. Benzodiazepines are known to enhance the effects of opioids, making this a favorable drug combination for those suffering from opioid addiction.

When a person ingests an opioid, the brain releases an overflow of dopamine. This produces a numbing, euphoric effect while breathing is also suppressed. Benzos work similarly, as they function as a sedative to calm a person’s nerves and suppress breathing. When drugs like oxycodone and Xanax are used in unison, cognitive function is affected greatly because there is a reduction in blood flow to the brain and respiratory rates can drop to severely low levels.

Both benzos and opioids carry a high potential for abuse separately, so when combined, the potential for abuse and health risks is greatly increased. When these drugs are abused together over an extended period of time, it can result in the damage of vital organs, memory loss, and even brain damage.

Since both benzodiazepines and opioids are central nervous system depressants, mixing drugs like Xanax and oxycodone increases the risk of a drug overdose. Approximately 30% of opioid overdoses involve benzodiazepines. In addition, the risk of overdose is 10 times higher in people using both benzos and opioids than it is if a person is only taking one of the two types of drugs.

Signs that a person may be suffering an overdose from opioids and benzos include:

How Treatment Can Help

While opioid withdrawal is typically not fatal, when opioids and benzos have been abused hand in hand with one another, a person may suffer from convulsions or seizures when these drugs are not taken. If you or a loved one is suffering from an addiction to benzodiazepines and opioids, the best way to begin the recovery process is through medical detox to ensure comfort and safety during the withdrawal period.

Drug rehab can help you learn to live without the use of addictive drugs like oxycodone, heroin, Xanax, or Valium. Rehab will take a clinical approach, using various methods of therapy to help you uncover the underlying causes and conditions of your substance abuse. Give us a call and start your journey to recovery today.