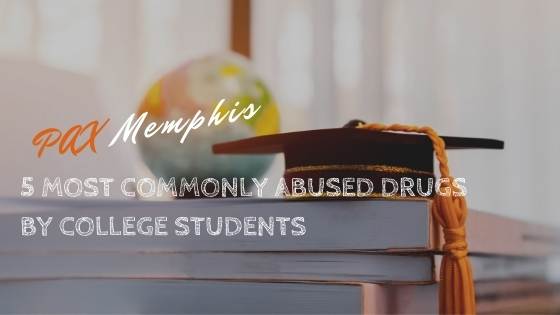 Even though college campuses are a place for students to learn and prepare for their careers, they are also one of the easiest places to score drugs of all kinds. Many young people view college as the first time they truly have freedom. They feel as though the door has opened up for them to try new things, enjoy life, and find out who they really are. Unfortunately, this often includes abusing drugs and alcohol or engaging in other risky behaviors.

Although any form of substance abuse can lead to negative consequences, some substances are more popular among college students than others. Here are the 5 most commonly abused drugs by college students.

Alcohol is the most commonly abused substance by college students. While many people don’t view alcohol as a drug, it is a mood and mind-altering substance with addictive properties, so it certainly can be considered a drug of abuse. Due to the legal status of alcohol and the normalization of binge drinking as a part of university culture, students are likely to view alcohol as a safer and more acceptable form of substance abuse.

Most students begin drinking at parties or with their friends. They may face peer pressure to drink, want to fit in with the people around them, or have a desire to use alcohol as a crutch to feel more comfortable in social situations. Binge drinking, in particular, is extremely common among college students.

According to the National Institute on Alcohol Abuse and Alcoholism, more than 33% of college students aged 18-22 engage in binge drinking each month. Binge drinking is particularly dangerous because it can pose serious health and safety risks. It can also increase the chances of a person becoming addicted to alcohol.[2]

Although marijuana is still illegal on a federal level, it has been decriminalized and legalized for recreational and/or medicinal use in many states. Students may use marijuana to fit in with their friends, enjoy parties, or relax.

While marijuana isn’t as addictive as other drugs, such as prescription stimulants or cocaine, it can still get students into significant trouble. Students who regularly smoke marijuana may slack off on their school work, drive while under the influence, or make poor decisions due to their altered state of mind. And, excessive marijuana use is addictive, and can certainly lead to a marijuana use disorder.

The National Institute on Drug Abuse reports that 14.6% of college men and 8.8% of college women engage in non-medical use of Adderall. Adderall is a prescription stimulant drug that is used to treat ADHD and narcolepsy.[3] When abused, it can give individuals a jolt of energy that lasts for several hours, making them more focused and goal-oriented. As a result, Adderall and other prescription stimulants are some of the most commonly abused drugs by college students – because it helps them stay up late and study!

Between 2007 and 2016, rates of MDMA/Ecstasy abuse among college students rose from 2% or 5%. Overall, up to 9% of college students are thought to have used Ecstasy at some point in their lives.[4]

Ecstasy, also known as MDMA, is a club drug that is popular at raves, festivals, and parties. It can intensify the feelings a person experiences while at a club or in a stimulating atmosphere. MDMA has stimulant and hallucinogenic purposes, so it can significantly cause impairment, especially mixed with other drugs.

Shockingly, MDMA is one of the most popular drugs to take with other drugs. Ecstasy users often engage in polydrug use, mixing MDMA with other substances like marijuana, alcohol, inhalants, LSD, cocaine, and heroin.[4] Unfortunately, polydrug use involving Ecstasy is very dangerous and can easily lead to seizures, hallucinations, panic attacks, dehydration, heart failure, and dangerous spikes in body temperature.

The last on the list of most commonly abused drugs by college students is cocaine. Cocaine is an illicit stimulant that comes in the form of a white powder and is usually snorted. Although it is often portrayed in the media as a “rich man’s drug,” cocaine use among college students increased from 2.9% in 1996 to 5.1% in 2007. Currently, it is estimated that between 4 and 13% of college students have used cocaine at least once in their lives, and the majority of cocaine users who went to college began using cocaine while enrolled in classes.[5]

Cocaine is illegal and highly addictive, which means it can have devastating effects on the lives of college students. Students may abuse cocaine at parties to stay awake longer and have more energy or for the rush of euphoria it provides. Regardless, cocaine abuse can have many legal and health repercussions.

College is an important time in a person’s life. It is when they find out who they are, what they like, and how they want to spend the rest of their lives. However, if drug abuse and addiction get in the way, it can derail a student’s plans for the future and jeopardize their degree. The good news is there is help available. Outpatient rehab programs in Memphis can provide flexible treatment schedules to students struggling with addiction, allowing them to continue attending class and completing their studies while obtaining the help they desperately need.

Contact one of our dedicated treatment providers today to find out how we can help you overcome your addiction.