How Addictive is Marijuana?

Home » Blog » How Addictive is Marijuana? 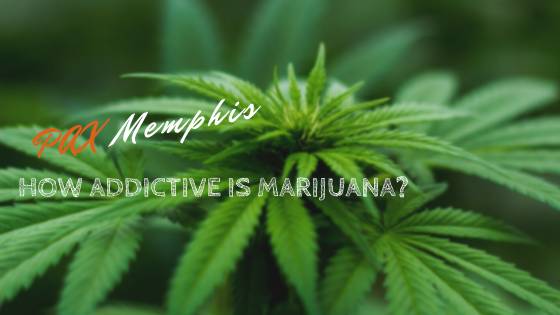 Marijuana is one of the oldest substances known to mankind. Dating back as far as 12,0000 years ago, it is believed that cannabis plants first evolved in central Asia on the lands populated by many hunter and gatherer tribes. The use of commercial and psychoactive cannabis then spread to Africa, the Middle East, and Europe. Furthermore, the history of marijuana within the United States began by the late 1800s when cannabis extracts were sold in pharmacies and doctors’ offices to treat stomach problems and other ailments.

It wasn’t long before scientists discovered that THC was the source of not only the medicinal properties of marijuana but the psychoactive compound responsible for the mind-altering effects as well. In the U.S. marijuana was not commonly used for recreational purposes until the early 1900s during the years of the Mexican Revolution. Immigrants from Mexico introduced the recreational practice of smoking marijuana to the American culture.

The psychoactive component of marijuana is delta-9-tetrahydrocannabinol, also known as THC. When a person smokes marijuana, THC enters the bloodstream, through the lungs, where it then travels to the brain. The absorption process of THC often takes 30 minutes to one full hour before the user experiences a “high”. Compared to other drugs, this is a much slower process. However, if a person ingests marijuana the high takes effect much faster.

Signs of marijuana use and abuse often include:

Marijuana use activates receptors in the brain that may cause symptoms such as impaired movement and memory, difficulty thinking, altered sense of time and sight, as well as behavioral and mood changes. Smoking marijuana can also affect your cognitive function and cause harmful cardiovascular effects, such as high blood pressure and worsening respiratory conditions. Marijuana has a central nervous system (CNS) depressant effect. In other words, when used in conjunction with other CNS depressant substances – marijuana can cause an additive effect.

People who smoke or ingest marijuana may build up a tolerance over time. In other words, these individuals will need to use more marijuana to achieve the same desired effect. Over time, this cycle can lead to marijuana addiction and dependence. The brain of an individual using marijuana for an extended period of time will adjust to having THC. Once the chemical is removed, or the individual attempts to stop using the drug, the person will experience withdrawal. Marijuana addiction occurs once the person’s body is both physically and psychologically dependent on marijuana. Despite negative consequences, the individual will feel they need marijuana to survive and is not likely to quit without the assistance of a drug rehab program. So, when it comes to determining how addictive marijuana is, it depends on the individual and how they respond to the effects of the drug.

For some, we know how marijuana is addictive. At PAX Memphis Recovery Center, we understand there is no one-size-fits-all solution to marijuana addiction. In fact, we believe in creating an individualized, comprehensive treatment plan fit to cater to the needs of each client that walks through the doors of our facility. In order to achieve the most effective results of addiction treatment, marijuana rehab must be tailored to the needs of each individual. Marijuana rehab at PAX Memphis generally involves four phases: medical evaluation, detoxification, addiction treatment, and aftercare. Our compassionate team of addiction professionals will work with you every step of the way. From various therapy options to restoring your health, we pride ourselves on helping each individual cultivate a foundation for continuous sobriety and a fulfilling lifestyle in recovery.

If you or a loved one is struggling with marijuana addiction and you don’t know how to overcome it, give us a call today!