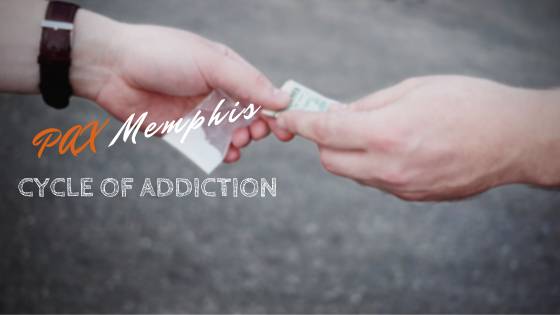 Addiction is a progressive and fatal disease of the brain. Individuals may find themselves gradually becoming addicted to drugs or alcohol. More often than not, many people are exposed to drugs and alcohol in a social setting. Over time, drug or alcohol misuse may be viewed as normal and seemingly harmless.

The cycle of addiction begins when changes occur within brain chemistry from the abuse of mood/mind-altering substances. The cycle is then perpetuated by physiological, emotional, and psychological dependency. The cycle of addiction will generally continue until an individual has experienced some type of intervention such as legal, financial, physical, family, and even emotional.

What is the Cycle of Addiction?

Research has shown that the addicted brain is chemically and physiologically different from a normal brain. A key component of understanding the cycle of addiction and the recovery process is to identify addiction as a neurological disorder.

Many individuals may experiment with drugs and/or alcohol for recreational purposes, to cope with unwanted feelings, or simply as a direct result of peer pressure. Regardless of how an individual begins to dabble in these substances, certain people will see their infrequent drug/alcohol use turn into a habitual pattern. This may happen gradually over time or develop as a response to a major life event such as family conflict, death, losing a job, relationship struggles, or even the onset of mental illness. Genetics also plays a major role in the susceptibility of an individual developing a substance use disorder.

Meanwhile, some individuals begin taking drugs in the form of prescribed medication for a legitimate health condition. According to a study conducted by the Mayo Clinic, 7 in 10 Americans take prescriptions and 13% of those take opiates. Although these drugs are prescribed to treat medical conditions, they may be abused if taken outside of the doctor’s instructions:

In 2013, SAMHSA reported that 6.5 million Americans used psychotherapeutic drugs for nonmedical purposes. Long term use of prescription drugs can alter the chemistry in the brain. Oftentimes, people taking prescription drugs long-term may be physically dependent before crossing over the threshold into a full-blown addiction. This reflects the changes to the brain brought on by drugs.

The Brain: Tolerance, Dependence, and Withdrawal

The human brain is a highly delicate and complex network of billions of nerve cells. These nerve cells release chemicals called neurotransmitters which are responsible for communication within the brain. Neurotransmitters bind to receptors, causing changes inside of them, and passing along signals to communicate. Some drugs work to replace neurotransmitters during this process. According to the National Institute on Drug Abuse (NIDA), certain drugs can stimulate these receptors two to ten times as powerfully as neurotransmitters normally do.

At first, this rush of excess neurotransmitters produces a powerful euphoria or high. However, overstimulation of the cells results in the cells taking protective measures to protect themselves against excessive and toxic levels of neurotransmitters. This results in the desensitization of receptors and ultimately produces tolerance. The development of tolerance requires the individual to take larger doses, more frequently, to achieve the same desired effect. In addition, as the desensitization continues, this leads to dependence – where the user will require a boost from the drugs just to feel well.

Individuals who have experienced tolerance and dependence on drugs may experience withdrawal symptoms if they do not taper off gradually. Withdrawal symptoms generally resemble the mirror of the drug’s effects. For example, if an individual is withdrawing from stimulants, he/she will experience extreme lethargy and depressive mood swings. Individuals who use drugs to cope with underlying mental illnesses often find their disorder returning more intense than before.

Society has a tendency to blame the individuals who have become addicted to drugs for their behavior, but the truth is that addiction is driven by real malfunctions and physiological changes that have developed deep in the brain. According to NIDA, addiction involves brain regions that control judgment, decision-making, self-control, memory, and learning. In other words, it is more difficult for addicted individuals to control drug-seeking behavior than for non-addicted individuals. The non-addicted brain has great difficulty imagining that it could become an addicted brain, or what that would be like – just as it is for the addicted-brain to understand a sober lifestyle. No person begins using drugs thinking that they will become an addict. Nonetheless, there are millions of Americans suffering from substance abuse disorder each and every day in the U.S.

Over time, individuals suffering from addiction may find themselves needing more of the drugs in order to avoid withdrawal. Oftentimes, these individuals spend more time seeking drugs, using drugs and recovering from the effects of drugs. These behaviors may result in a wide variety of life problems such as:

Often times, the direct consequences of prolonged drug abuse will encourage an individual to seek help for their substance abuse problems. Quitting some drugs may be easier than others – withdrawal from marijuana may result in irritability, while opiate withdrawal may be unpleasantly painful, and alcohol withdrawal can be life-threatening. The variety of drugs abused and the chronic nature of the disease of addiction requires treatment approaches to be individualized to fit the needs of each client. Medication, continuous behavioral therapy, and attendance in support group meetings are all vital to maintaining long-term recovery.

There are a number of different therapies that are useful in treating drug addiction. Evidence-based treatment generally includes some specific forms of psychotherapy. For example, Cognitive Behavioral Therapy (CBT) helps individuals identify stressors and triggers that contribute to their drug use. CBT teaches these individuals new, healthy ways of perceiving and responding to these triggers. Trauma-informed therapy is specific to individuals who have survived a traumatic event. This type of therapy will help the client identify and work through past trauma and learning healthy ways to cope with symptoms of PTSD, anxiety, or depression.

12-Step groups and other support programs offer a supportive network of other individuals who have experienced the unique struggles of addiction. People who attend these specific support groups often share their experience, strength, and hope while offering guidance to new individuals.