The Dangers of Binge Drinking: Causes, Side Effects & Risks 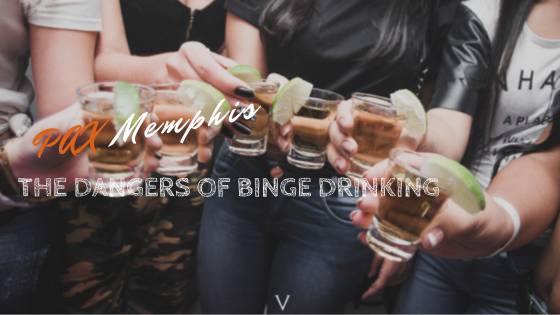 Binge drinking is one of the most commonly recognized signs of alcohol abuse in the United States. In fact, 1 in 6 U.S. adults partakes in binge drinking four times a month, resulting in 17 million binge drinks consumed by adults annually. Binge drinking is defined as consuming alcohol in a pattern that produces a blood alcohol concentration (BAC) to 0.08% and up. In other words, binge drinking is the act of a man drinking 5 alcoholic beverages or a woman having 4 in approximately a two-hour timespan. Individuals of all ages drink, including college students as well as elderly men and women, but some are more susceptible to the dangers of binge drinking than others.

Because drinking alcohol is so heavily accepted in our society, many individuals view alcohol as being safer than other drugs. They see it as just a form of harmless fun. However, binge drinking is associated with an array of adverse effects, including legal, financial, social, psychological, and physical issues. For example, binge drinking is directly linked to dangerous patterns of behavior such as drunk driving. It is common for individuals who binge drink to suffer from legal consequences, due to issues such as drunk driving or public intoxication. In addition, there is a long list of adverse health effects associated with this form of alcohol consumption. 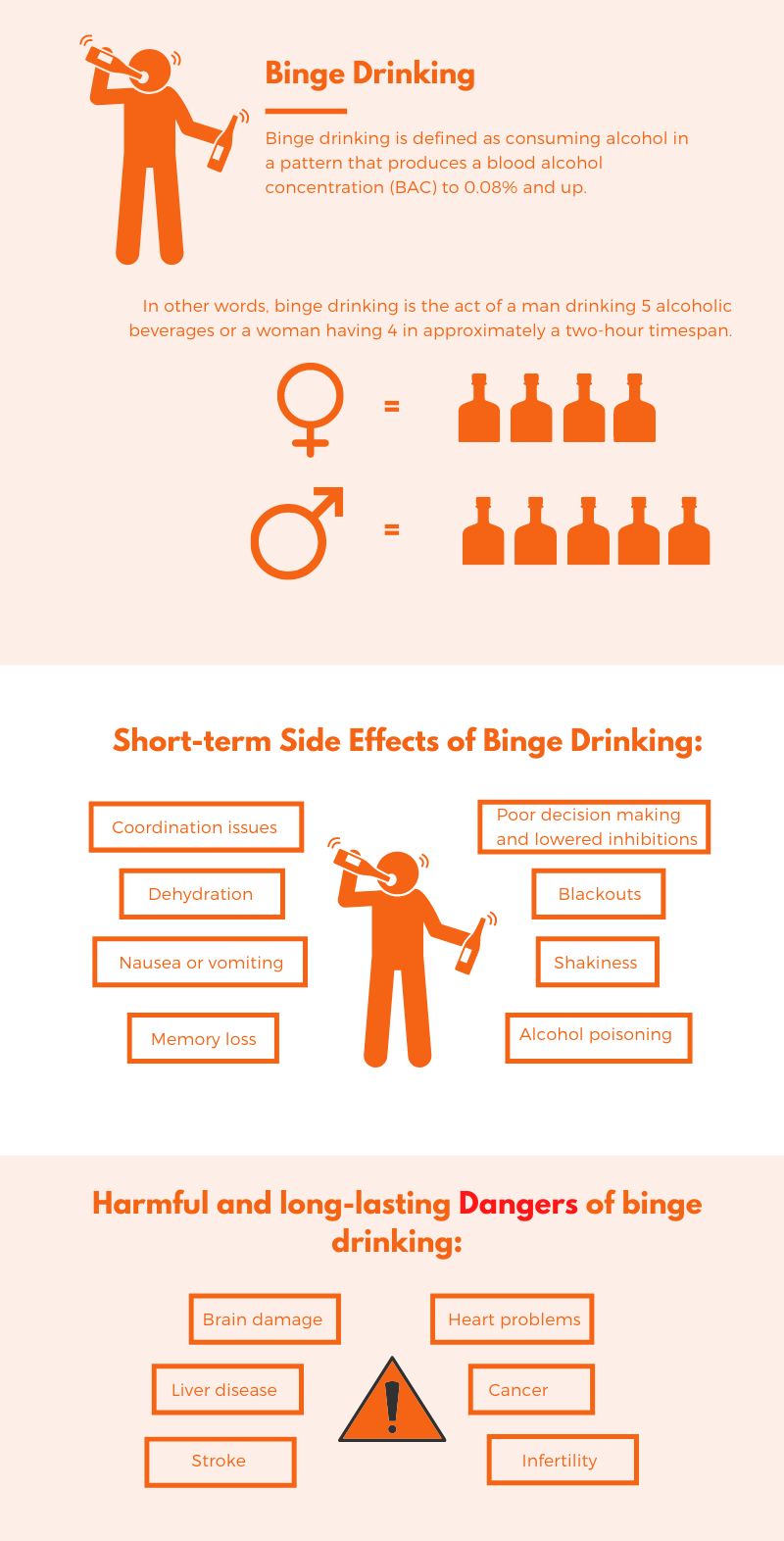 Individuals of all ages binge drink for a variety of reasons. As previously mentioned, many people view binge drinking as a fun, harmless activity to partake in. in other words, binge drinking is perceived as relatively “normal”. Teenagers or young adults, in particular, often view this activity as a right of passage among their friend groups. However, young people are not the only people who drink irresponsibly.

The common causes of alcohol abuse include, but are not limited to:

Many of the previously mentioned factors fuel binge drinking due to a lack of understanding of the risks and adverse effects this activity can cause. In fact, neuroscience has shown that binge drinking can cause a false stimulation of pleasure centers in the brain. Due to this, individuals receive an equally false sense of well-being and happiness. As a result, many individuals continue to binge drink, risking the possibility of developing an addiction.

The Side Effects of Binge Drinking

Binge drinking is associated with a wide range of adverse health and behavioral effects. While some side effects can be minor and short-term, others can cause permanent damage.

The sudden and short-term side effects of binge drinking include:

Binge drinking alcohol puts individuals at risk for a variety of health concerns. For example, alcohol is known to delay an individual’s reaction time, causing a simple task such as driving a car to have the potential of becoming fatal. Additionally, drinking excessively impairs one’s judgment, leaving the individual at risk for unintentional injuries such as sexual assault, domestic violence, or alcohol poisoning.

In addition to short-term side effects, frequent binge drinking can lead to an array of long-term health complications. Unfortunately, many individuals overlook the long-term consequences of binge drinking due to the fun and exciting nature of the activity.

The harmful and long-lasting dangers of binge drinking include:

The side effects of binge drinking depend on the amount an individual drinks, how quickly they drink, any other substances involved, as well as their body weight, gender, and medical history. For example, alcohol affects women differently than men. To explain, women generally have a lower amount of body water than men, causing them to reach a higher blood alcohol concentration level in a faster manner.

The Dangers of Binge Drinking

In addition to the numerous side effects of binge drinking, there are real dangers to be aware of. While many people view binge drinking as having a wild time at a party or nightclub, binge drinking can present serious risks and consequences.

According to the CDC, the following are common dangers of binge drinking:

Binge drinking can be a serious problem, yielding serious consequences. When individuals neglect to pay attention to how much and how fast they drink, they are putting themselves and others at extreme risk.

Unfortunately, many individuals do not see binge drinking as a problem – causing alcohol treatment to become difficult. However, binge drinking is a serious problem with severe adverse health and behavioral effects, as previously mentioned. As a result, if you feel as if you suffer from a binge drinking problem there are a number of treatment options to choose from. For example, professional alcoholism counseling, medical detox, as well as inpatient and outpatient addiction treatment are common solutions for binge drinking.

If an individual has been binge drinking frequently and over a long period of time, they will most likely become physically dependent and mentally addicted to alcohol. That’s why attending a professional alcohol detox center is vital for one’s safety. Alcohol detox centers help patients to remove alcohol from their bodies while avoiding and treating harmful symptoms of withdrawal. Additionally, attending alcohol detox allows individuals to transition to inpatient alcohol addiction treatment. This is beneficial because individuals will receive extensive therapy, counseling, and support while they work towards learning how to live a sober and alcohol-free life.

If you or a loved one have issues with binge drinking, contact PAX Memphis for more information on alcohol abuse treatment.