How Drugs Affect the Pupils 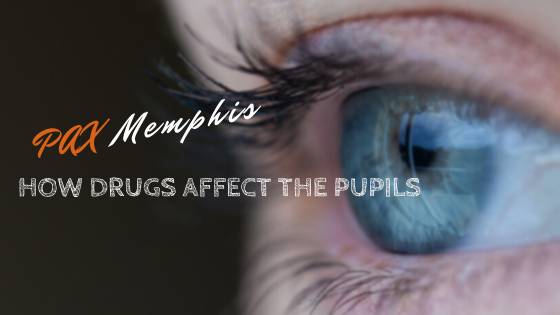 Suspecting a loved one of abusing drugs and/or alcohol is a confusing and heart-wrenching experience. Many individuals may feel as if they are overreacting or perhaps they are certain their loved one is struggling but afraid to approach the situation. Fortunately, there are many signs that indicate an individual has been using drugs. For example, you can look at how drugs affect pupils. Law enforcement officers and medical professionals often face situations in which individuals are struggling with substance misuse. One of the key indicators that an individual is under the influence of an illicit substance is the dilation level of the eyes. Dilated pupils can shed light on drug use as well as indicate which particular drug was used.

Not only does alcohol and drug abuse cause side effects such as nausea, sleepiness, mood changes, aggression, and loss of coordination, but also dilated pupils as well. Changes in the eye, such as pupil size, motion, and color of the whites of the eyes, are used to assess whether a person is intoxicated and what substance he/she has misused. For example, bloodshot eyes are a common symptom of intoxication from a variety of drugs such as alcohol, cocaine, and marijuana. Pinpoint pupils are a common symptom of opioid intoxication and potential overdose. Drug use affects pupils in many ways.

Dilation of the pupil, also known as mydriasis, is the process in which the iris opens due to the activation of two muscle groups in the eye: the iris sphincter and the iris dilator. The parasympathetic nervous system is responsible for controlling a person’s autonomic processes while an individual is at rest, is what triggers the iris sphincter to respond. The sympathetic nervous system controls the body’s fight-or-flight response, which is what triggers the dilator.

Specific drugs such as psychotropic stimulants affect both of these nervous systems and cause pupil dilation. Depending on the type of drug taken, different substances affect either the parasympathetic, sympathetic, or both systems. Elements of the drug affect neurotransmitters in the brain that control mydriasis.

Other common signs of intoxication indicated by the eyes include:

How Drugs Affect the Pupils

Almost every substance that is taken in excess has the potential to cause changes in the eyes of the user. Here are specific changes in pupils, eye motion, or vision that often indicate intoxication or overdose based on the specific type of substance.

Dilated Pupils on Drugs: Helping Your Loved One Seek Treatment

If you are concerned that your loved one is addicted to alcohol and/or drugs, there are plenty of physical warning signs that often indicate substance misuse. Changes to eyes, vision, and within the brain are a few of the various serious health consequences associated with prolonged addiction. Intoxicating substances can cause a number of severe health complications and may ultimately lead to overdose or death. The most effective way to prevent or slow the side effects of substance abuse is for an individual to seek help at detox and then a substance abuse treatment facility. If you suspect your loved one is struggling with addiction, you should reach out for help from a medical professional. PAX Memphis is available to help your loved one recover from substance abuse – call us today!