The Dangers of Smoking Dabs 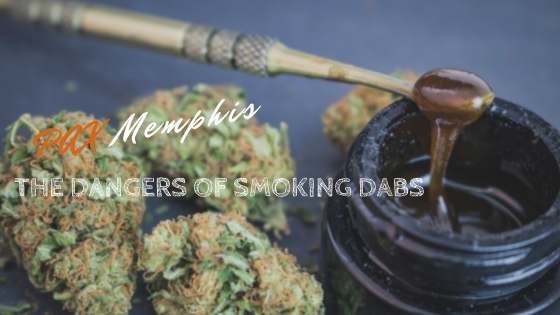 Dabs, or dab drug, are a form of marijuana concentrate that users smoke. Unlike weed, dabs don’t come in plant form. Weed dabs may come in the form of marijuana wax, shatter, butane hash oil (BHO), live resin, or budder. Since dabs are made from marijuana oils and other THC concentrates, many people believe smoking dabs is no different than smoking marijuana. However, this couldn’t be further from the truth.

Dabbing is a term that is short for “smoking dabs.” This is when users take their wax or another form of marijuana concentrate, place it on a flat surface like a nail or metal plate, heat up the surface, and inhale the vapors through a rig. These rigs may be sold individually as “oil rigs” or as attachments that can be placed onto the tip of a bong. People can also smoke concentrates by placing hash oil or live resin oil into a vaping cart to vape. This method is particularly popular among teens.[1]

Although this method of marijuana use has been around for at least 20 years, dabbing has skyrocketed in popularity in recent years. An increase in dabbing can be attributed to both the growth of commercial production and sales of marijuana as well as the decriminalization and legalization of the drug in several states.

Side Effects of Smoking Dabs

Marijuana oils are considered more dangerous than marijuana flower. Dabbing has a number of unpleasant and potentially dangerous side effects. 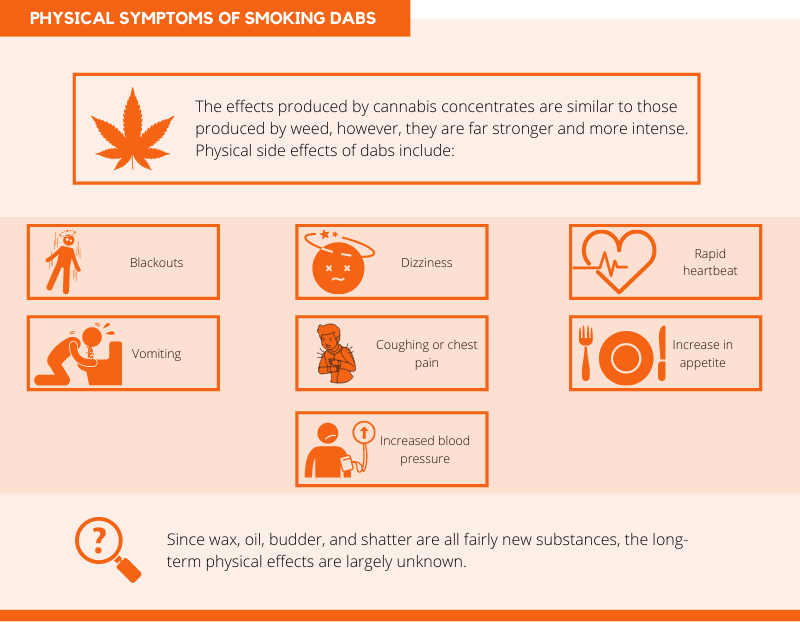 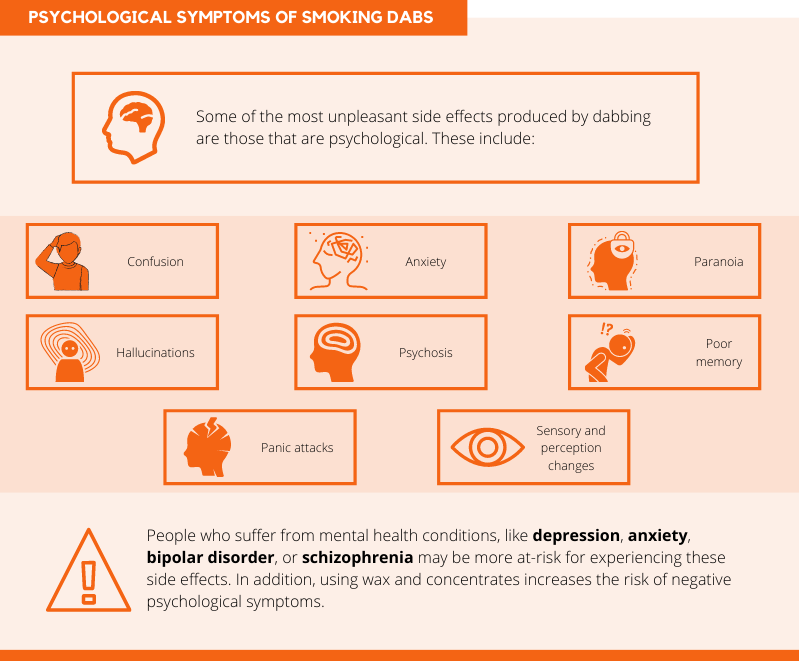 The effects produced by cannabis concentrates are similar to those produced by weed, however, they are far stronger and more intense. Physical side effects of dabs include:

Since wax, oil, budder, and shatter are all fairly new substances, the long-term physical effects are largely unknown.

Some of the most unpleasant side effects produced by dabbing are those that are psychological. These include:

People who suffer from mental health conditions, like depression, anxiety, bipolar disorder, or schizophrenia may be more at-risk for experiencing these side effects. In addition, using wax and concentrates increases the risk of negative psychological symptoms.

One of the most alarming dangers associated with smoking dabs is its ability to significantly increase a person’s tolerance.[2] Dabs contain a much higher percentage of THC than normal cannabis does, so tolerance increases at a rapid rate. This means regular marijuana users will need to use more and more THC to produce the effects they desire. Eventually, some users will be unable to experience any pleasurable side effects from weed – they will have to use concentrates in order to feel high.

To be clear, there is a stark difference between smoking weed and smoking dabs. Dabs are far more potent and come with increased risks and dangers. Here are a few potential dangers of using marijuana concentrates.

Risk of Explosion or Burns During the Extraction Process

The list of concerning dab drug side effects encompasses more than the use of the drug itself. In fact, manufacturing dabs can be extremely dangerous. Concentrates are made by blowing butane through a marijuana plant that is packed in a pipe. This helps to extract the oils from the marijuana plant. Butane is a highly volatile and flammable liquid, so if done improperly, the extraction process can lead to explosions, fires, or burns.

High Potency Can Lead to Dangerous Side Effects

The average marijuana flower has 12-13% THC. Marijuana extracts, on the other hand, usually have a THC content that is greater than 50%. Some concentrates contain as much as 80% THC.[3] With such a high amount of THC, people who use dabs may be more likely to experience adverse side effects such as paranoia or psychosis. Some users may even pass out immediately after hitting a dab, putting themselves at risk of injury by falling. In addition, the dab drug can be more detrimental to young developing brains than marijuana due to the potency of the substance.

Smoking Dabs Can Be Addictive

Despite popular belief, dabbing is not the same as smoking weed. Since marijuana concentrates are more potent than marijuana flower and can lead to increased tolerance, they can also lead to worse withdrawal symptoms.

People who become physically dependent on the THC contained in concentrates may experience body aches, insomnia, restlessness, depression, sweats, nausea, and lack of appetite if they try to stop smoking. In the long-term, repeated dab or weed use can lead to marijuana addiction and dependency that requires treatment on a professional level.

Marijuana Extracts Are Widely Unregulated and May Contain Toxic Chemicals

Although there are several states where you may be able to purchase marijuana concentrates recreationally or with a prescription, these substances are illegal on a federal basis. This means any concentrates, such as wax, shatter, or live resin, that is purchased on the streets is completely unregulated and can contain any number of dangerous chemicals and additives. In fact, a 2015 study found that over 80% of marijuana extracts were contaminated with pesticides or poisonous residual chemicals that were leftover from the extraction process.[4] As a result, people never really know what they are inhaling into their lungs when they are dabbing.

Get Help for Marijuana Addiction

Abusing marijuana and cannabis concentrates doesn’t always lead to addiction, however, if you are abusing weed or dabs and find that you are unable to stop on your own, it may be time to consider getting help.

At PAX Memphis Recovery Center, we offer outpatient treatment programs that are perfect for people suffering from marijuana dependency. Give us a call today to see if our rehab programs are a good fit for you.