Codeine vs. Hydrocodone: Differences and Similarities 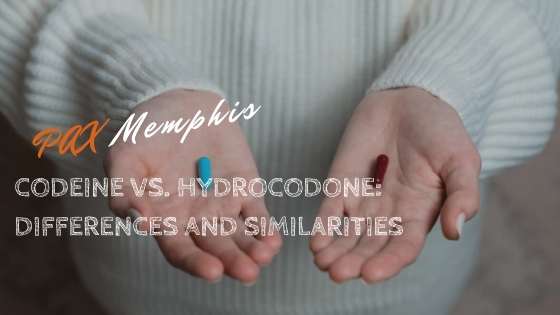 Many people believe that the only dangerous opioids are highly potent ones, like morphine, heroin, or fentanyl. However, even the prescription opioids used to treat minor to moderate pain can be addictive and dangerous. Let’s take a look at the differences and similarities between codeine and hydrocodone.

An Overview of Codeine

Codeine is a naturally-occurring opioid medication used to alleviate mild to moderate pain. This medication is available in pill form by itself, in a pill combined with acetaminophen (Tylenol with Codeine), or in liquid form combined with promethazine, guaifenesin, or aspirin.

When used for pain, codeine binds to opioid receptors and reduces pain signals. When used to treat coughing, codeine decreases activity in the areas of the brain that make people cough.

Even though this medication is a lot weaker than other opioids, it still carries a risk of abuse, addiction, and physical dependence. The brain actually turns codeine into morphine when ingested, so it works in similar ways as morphine and heroin. The DEA has classified codeine as a Schedule II controlled substance.

Common, yet not severe, side effects of codeine are:[2]

Other more serious side effects of codeine include:

An Overview of Hydrocodone

Hydrocodone is a semi-synthetic prescription opioid medication used to relieve moderate to severe pain. It is only used in patients who need around-the-clock treatment for pain or those who cannot take other pain killer medications. Similarly, it is better tolerated in people who are allergic to codeine. Hydrocodone is most commonly combined with acetaminophen and comes in a pill form (Vicodin or Lortab), however, it may also be prescribed as a cough suppressant.

Hydrocodone works in the same way as other opioids in the way that it binds to opioid receptors and slows down the central nervous system. It is considered a fairly potent opioid that has a risk for abuse, addiction, and overdose. The DEA has classified hydrocodone as a Schedule III controlled substance, indicating a higher potential for abuse than drugs like codeine.[3]

Common side effects of hydrocodone include:

Hydrocodone may also produce some severe side effects, including:

Codeine vs. Hydrocodone for Pain

There are many similarities between codeine and hydrocodone. Both medications are narcotic opioids that are used to relieve pain and are only available by prescription. In addition, both drugs target the same areas of the brain by binding to opioid receptors, relieving pain, and producing a high in users who abuse the substances.

As opioids, these medications are central nervous system depressants that may produce constricted pupils, drowsiness, nausea, dizziness, itching, and constipation. People who abuse codeine or hydrocodone may become physically dependent on the substance and experience withdrawal symptoms when they stop taking the drug.

While both medications work in similar ways, hydrocodone is more powerful than codeine. As a result, people with more severe pain are more likely to be prescribed hydrocodone. Another difference between the two drugs is that codeine is an instant-release medication while hydrocodone comes in both instant-release and extended-release options.

Studies have found that hydrocodone may be more effective in relieving pain with minimal side effects when compared to codeine.[4]

Codeine vs. Hydrocodone for Cough Syrup

Is Codeine or Hydrocodone More Addictive?

If someone stops taking either of these medications cold-turkey, they may experience difficult withdrawal symptoms. Symptoms of opioid withdrawal include:[5]

Since hydrocodone is more potent and has a higher potential for abuse, it is thought to be more addictive than codeine. However, both drugs are dangerous when abused and can lead to physical dependence, addiction, and overdose.

Using prescription opioids in combination with alcohol or other sedatives may increase the risk of addiction, respiratory depression, and overdose.

Get Help for Opioid Addiction

Regardless of the potency, opioids are highly addictive when abused. If you or someone you know is addicted to prescription painkillers, it’s time to consider getting help. Pick up the phone and call now to speak to a dedicated treatment provider to learn about your drug rehab options.