Binge Eating and Substance Abuse: Is There a Connection?

Home » Blog » Binge Eating and Substance Abuse: Is There a Connection? 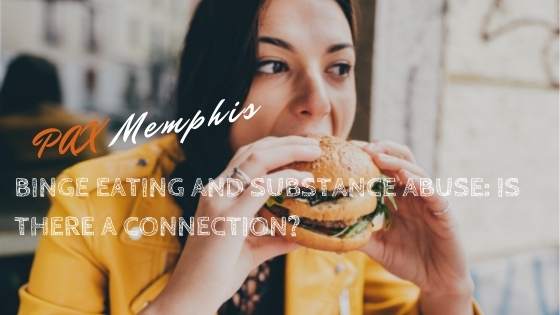 Addiction, on the other hand, is often seen as a disease of “more.” More drugs, more alcohol, and more money. To combat the disease of “more,” people generally promote abstinence – or sobriety. People can’t quite stay abstinent from food, which is what makes the relationship between binge eating and substance abuse so complex.

What is Binge Eating Disorder (BED)?

Binge eating disorder (BED) is an eating disorder that is characterized by episodes of binging. Binging is the act of eating extremely large quantities of food, usually to the point of discomfort.

According to the National Eating Disorders Association (NEDA), an episode of binge eating meets these two criteria:[1]

Other symptoms of binge eating disorder include:

In order for a person to be diagnosed with BED, they must have an average of at least 3 episodes of binge eating per month.

Binge eating and addiction are similar in the way that both drug and food binges are typically followed by feelings of guilt, remorse, depression, and anxiety. However, people who abuse substances may attempt to cover up these feelings by using drugs that alter the way that they feel.

Since drug and alcohol abuse changes the brain on a chemical level, it can make it difficult for people to process emotions and make good decisions. This can lead to poor decision-making regarding food. For instance, people who abuse marijuana may get the “munchies.” This is because marijuana is known to increase appetite in some users and can lead to episodes of binging.

People who abuse substances may also be at a higher risk of complications associated with binge eating. Not only do substances damage the body and lower the immune system, making people more susceptible to infection, but many substances abused by people with BED (such as diuretics or appetite suppressants) can negatively interact with the very medications that are used to treat BED in the first place.

Co-occurring binge eating and substance abuse can lead to a variety of medical complications, such as gastrointestinal problems, high blood pressure, and heart problems. These individuals may also be more likely to see extreme fluctuations in their weight due to their episodes of binge eating and drug or alcohol use.

People with binge eating disorder may intentionally abuse substances that suppress their appetite. Stimulants, both prescription and illicit, are widely known to decrease appetite, increase metabolism, and lead to weight loss. Since many people with BED believe they are overweight or want to stop eating so much, some may use stimulant drugs, like Adderall, meth, or cocaine, to get rid of their food cravings.[2]

Even though stimulants may decrease appetite, they do so at an extremely high cost. Stimulant abuse can lead to addiction, paranoia, psychosis, overdose, and other severe health problems. Furthermore, stimulant abuse tends to perpetuate risk-taking behaviors, anxiety, and recklessness – all symptoms that can be harmful to a person’s well-being and counterproductive to BED recovery.

Another substance that people with BED may abuse is alcohol. Unlike drugs, alcohol is a liquid that contains calories. People with eating disorders may decide to try and get their calories from alcohol rather than food in order to restrict their food intake.

Of course, binge eating and alcohol abuse are extremely dangerous. People with these conditions are at an increased risk of developing alcoholism, diabetes, high blood pressure, fatty liver, obesity, and other health problems.

Studies have found that both binge eating disorder and substance use disorder have similar phenomenology and neurological pathways. After all, both conditions are characterized by urges, binging episodes (whether it be drugs or alcohol), and impairment.[3] However, this also means that similar treatments can be used to address both conditions.

The standard treatment for binge eating and substance abuse involves integrated treatment that combines services for both health conditions. A combination of group and individual therapy is used to help people with co-occurring disorders.

Through behavioral therapy, patients are able to recognize their negative thought processes, understanding how their eating and substance abuse are related, and learn how to cope without binging on food, drugs, or alcohol.

Three of the most common therapies for BED include:

In addition to therapy and counseling, patients are encouraged to join a support group to help with their recovery.

At PAX Memphis Recovery Center, our mental health track allows for the treatment of co-occurring disorders such as binge eating disorder and addiction. With a small patient-to-therapist ratio and evidence-based therapies, you’ll know that you’re receiving the best possible care.

Call today to get help for yourself or a loved one or to learn more about our addiction treatment programs.