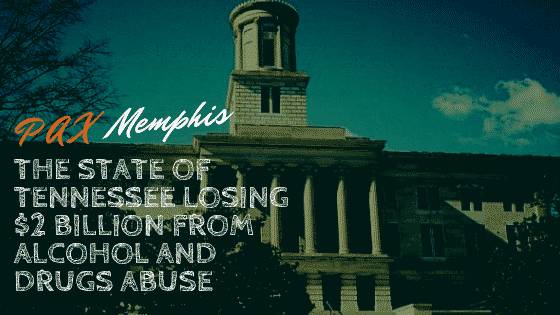 The State of Tennessee loses over $2 billion annually as a result of drug and alcohol abuse. Income from labor market fallouts attributes to over half of this money according to reports.
The epidemic of substance abuse has started a national conversation concerning both access to drugs and treatment for substance abuse. However, the impact of substance abuse on the American economy is not as widely discussed and is not a major topic when it comes to new legislation.

The University of Tennessee Health Sciences Center preventive medicine chair, Teresa Waters, researched the economic costs associated with substance abuse in Tennessee. The substance abuse outbreak caused reduced productivity in the workplace and high medical costs. Because of this, the associated cost tallied to $2 billion annually. The results were expected to be big but the final tally surprised Waters given the fact that her analysis used a conservative method.

The outbreak of opioid abuse has effected the economy on a national scale, as well. The outbreak cost the US  economy over $594 billion in 2015 as projected by the Council of Economic Advisers of the White House in a study.

According to Axial Healthcare CEO, John Donahue, there are a number of physicians being trained in addiction medicine in most states in the US and it is very costly. Axial Healthcare is a medical startup company in Nashville that specializes in identifying individuals who are at risk of addiction by working with insurers. According to Donahue, Axial has found out that patients who have a large risk of opioid abuse use medical services 200% more than those not using opioids.

According to a report in 2017, TennCare, Tennessee’s state Medicaid program, spent a total of $41.4 million on babies born with NAS (Neonatal abstinence syndrome, a group of conditions caused by exposure to drugs in the womb and subsequent withdrawal). This figure has been rising for years. A 2015 report showed that TennCare spent $76.9 million on opioid abuse hospitalizations. In 2015, drug and alcohol-related imprisonments had a cost of about $123 million. The State loses about $240 million in annual revenue as a result of the percentage of people out of work because of substance abuse.