Should I Attend A Detox Center for Antidepressant Withdrawal?

Home » Blog » Should I Attend A Detox Center for Antidepressant Withdrawal? 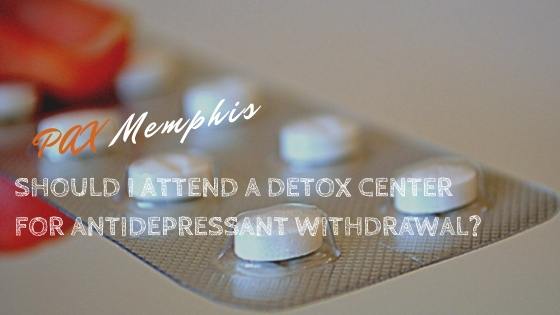 According to Harvard Health, antidepressant use has increased by over 400% in recent years and up to 20% of American adults over 18 take an antidepressant.[1] Furthermore, antidepressants are the third most commonly prescribed type of medication in the United States. With so many people taking antidepressants, it’s important to understand the possible consequences that can occur if they stop taking them suddenly.

Although it may not be necessary to enroll in a drug and alcohol detox program, antidepressant withdrawal can be dangerous. Rather than quitting these medications cold-turkey, it’s best to taper off of them using a lower dose until the body is no longer dependent on it.

Antidepressant medications are prescribed to help treat symptoms of depression. Some antidepressants may also be used to treat PTSD, OCD, panic attacks, anxiety disorders, and more. These medications work by fixing chemical imbalances in the brain that are related to serotonin and dopamine.

Long-term antidepressant use is common and usually recommended since depression is a chronic mental health condition. However, people who take antidepressants for more than 6 weeks at a time may experience withdrawal symptoms when they stop taking their medication. Quitting antidepressants abruptly will place the brain in a state of imbalance that produces physical and psychological symptoms – a condition known as antidepressant withdrawal.

Since the word “withdrawal” is often tied to drug addiction, many medical professionals prefer to use the term “discontinuation syndrome” to imply that antidepressants are not addictive.[2] Still, it’s critical to not undermine how severe the side effects can be after someone stops taking their antidepressant.

The longer a person takes an antidepressant and the higher dose they take, the more severe and long-lasting their symptoms will be. Common symptoms of antidepressant withdrawal include:[3]

One unique symptom that is often experienced by people who quit taking antidepressants is referred to as “brain zaps.” Brain zaps feel like an electric pulse or shock sensation being sent through the brain. While these are not deadly, they can be painful and extremely difficult to cope with.

How long withdrawal lasts varies from one person to the next. Some people won’t experience any symptoms for several weeks while others will have finished detoxing completely. A major contributing factor to the duration of antidepressant withdrawal is the length of time a person took the medication. For instance, someone who was taking an antidepressant for several years may experience more severe withdrawal symptoms compared to someone who was only taking them for six months.

Since there are so many factors that go into the antidepressant withdrawal timeline, it’s always best to speak with a doctor before stopping an antidepressant. They can discuss the risks and help patients develop a plan to taper off of their antidepressant if needed.

Tapering is the process of gradually reducing the dose of a medication to wean a person off slowly. There is no exact science to an antidepressant taper as every person will have a unique tapering schedule to follow. The best way to create a tapering schedule is to speak with the doctor who prescribed the antidepressant. They are able to reduce the dose and track the patient’s symptoms accordingly.

Some people quit taking antidepressants only to experience rebound depression, anxiety, and other symptoms. These can be difficult to deal with. Therapy and counseling can sometimes stand as a substitute for some medications. Whether you’re looking for a detox center or for mental health treatment, we’re here to help. Call today to learn about your treatment options.