The Dangers of Taking Suboxone During Pregnancy

Home » Blog » The Dangers of Taking Suboxone During Pregnancy 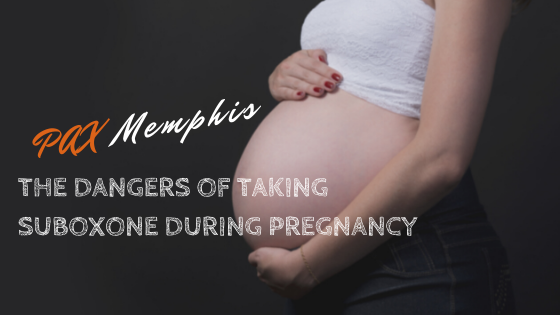 Even though the drug is shown to improve birth outcomes in newborns with opioid-addicted mothers, there are many dangers associated with taking Suboxone during pregnancy. Between 1999 and 2014, the number of women struggling with opioid use disorder who were delivering babies skyrocketed by more than 300%.[1] This number is startling, not only because of the ongoing opioid crisis but also because opioid abuse during pregnancy puts both the baby and the mother at high risk for complications. In lieu of this, studies have found that between 2000 and 2009, the number of babies who were born suffering from neonatal abstinence syndrome (NAS) tripled.[2]

NAS is a condition that occurs in babies who are born dependent on opioids as a result of their mother taking opioids during pregnancy. All opioids, including prescription painkillers and heroin, have the potential to pass through the placenta into the system of the unborn baby. As a result, these babies are born experiencing withdrawal symptoms – a condition that is known as neonatal opioid withdrawal syndrome (NOWS). Babies who experience neonatal abstinence syndrome (NAS) may suffer low birth weights, respiratory distress, seizures, fever, restlessness, trouble feeding, and be difficult or impossible to soothe.

In order to help ensure a safer birth for both the baby and the mother, physicians and addiction specialists often recommend Suboxone to their patients. Suboxone is known to help reduce cravings and help people refrain from using addictive opioids, like heroin, oxycodone, or fentanyl. However, Suboxone contains buprenorphine – which is an opioid drug in itself. As a result, anyone who is considering taking Suboxone during pregnancy needs to consult with their physician about the potential dangers and benefits. This knowledge helps ensure that a woman is making the best decision for herself and her baby.

When is Suboxone Used During Pregnancy?

Suboxone, a medication containing buprenorphine and naloxone, is a United States Food and Drug Administration (FDA) approved prescription drug used to treat opioid use disorder and opioid dependence. Buprenorphine, a partial opioid agonist, helps wean individuals off of stronger opioids over an extended period of time. This not only reduces the severity of withdrawal symptoms, but it also helps prevent drug cravings. As a result, Suboxone use combined with therapy in a medication-assisted treatment program is highly effective at lowering relapse rates and opioid-overdoses while improving birth outcomes in opioid-addicted mothers. It is often used in patients who are trying to come off of full agonist opioids, such as heroin, hydrocodone, or OxyContin.

As a result, physicians and addiction specialists usually don’t recommend that pregnant women quit taking opioid drugs cold-turkey. Instead, they are weaned off of higher doses of opioids using medications like Suboxone or methadone.[3] However, it’s important to note that, because of the dangers of taking Suboxone or buprenorphine during pregnancy, most physicians prescribe single-action buprenorphine formulas rather than medications containing naloxone.

Complications Associated with Opioid Use During Pregnancy

There are many potential side effects of opioid abuse and dependence during pregnancy. Buprenorphine is not a strong or potent opioid, but when abused, may lead to similar birth defects and complications as opioids do. As a result, it is important to understand the side effects of taking Suboxone while pregnant. The CDC explains that

Overall, babies who are exposed to opioids while in the womb are more likely to have low birth weight, poor fetal growth, longer and more frequent hospital stays, be born premature, or experience birth defects.

One primary concern regarding taking Suboxone during pregnancy is that buprenorphine may still lead to Neonatal abstinence syndrome. NAS refers to a group of problems that occur in newborns who were exposed to opioids for a long period of time while their mother was pregnant. Essentially, once the mother becomes dependent on opioids, the baby does, as well. If the mother is still using opioids a week or two before she gives birth, the baby will be born experiencing withdrawal symptoms. NAS may also occur in babies with mother’s addicted to alcohol, barbiturates, some antidepressants, and benzodiazepines.[4]

The label on Suboxone medications indicates the medication’s potential to cause harm to fetuses and unborn babies. As a result, pregnant women should only take Suboxone under the strict supervision of a medical professional while having full knowledge of the possible side effects of Suboxone during pregnancy.

Should Mothers Take Suboxone During Pregnancy?

There are many potential side effects of taking Suboxone while pregnant. First, naloxone may be dangerous to unborn babies because it is thought to cause hormonal changes in the mother and the fetus that may complicate the pregnancy. Furthermore, naloxone may precipitate worsening withdrawal symptoms in newborns, making it a significant risk. As a result, most physicians and treatment providers use single-action buprenorphine formulas when treating pregnant women who are suffering from opioid withdrawal rather than combination formulas like Suboxone.

Still, other studies have suggested that Suboxone is a safer alternative to both opioids and many other opioid-replacement drugs like methadone.[6] In addition, women who are already taking Suboxone when they get pregnant are not generally told to stop taking it because it could spark acute withdrawal, putting the fetus at further risk. For this reason, it’s crucial to speak with your healthcare provider to determine which treatment method is best for you and your baby.

To learn more about Suboxone treatment or our addiction treatment programs in Memphis, contact us today.