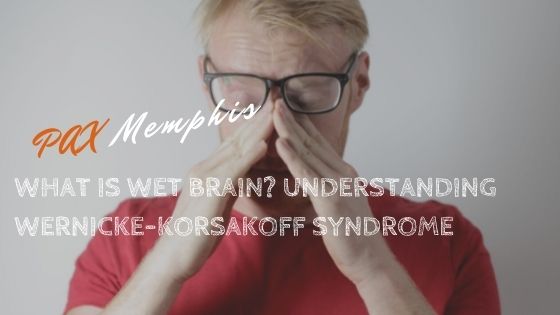 The Connection Between Alcohol Abuse and Wet Brain

Alcohol is widely accessible and even acceptable in American culture. Drinking safely and in moderation is not a bad thing, and many experts have even touted the potential medical benefits of drinking alcohol in moderation. However, moderate drinking is defined as one drink per day for women and two drinks per day for men – a number that binge drinkers, problem drinkers, and alcoholics often ignore.

The National Institute on Alcohol Abuse and Alcoholism (NIAAA) reports that nearly 15 million people in the United States have an alcohol use disorder (AUD). AUD is a diagnosis that describes a chronic, relapsing brain disorder where a person cannot stop drinking despite social, occupational, or health consequences.[1] People who struggle with AUD, sometimes referred to as alcoholism, may be at higher risk of developing devastating health conditions – including wet brain.

According to the NIAA, up to 80% of alcoholics have a thiamine (Vitamin B1) deficiency.[2] Vitamin B1 is an essential vitamin the body uses to break down sugars and produce energy. People who consume a poor diet or abuse alcohol are more likely to have a thiamine deficiency. In addition, people who experience alcohol withdrawal may become nauseous and vomit, causing them to lose more essential minerals and vitamins.

Thiamine deficiency is thought to cause damage to the brain and ultimately result in Wernicke-Korsakoff syndrome (WKS) and is one of the most common side effects of long-term alcohol abuse.

The brain needs thiamine to function properly, but heavy alcohol abuse hinders the absorption, activation, and storage of the vitamin. Unfortunately, WKS has a sudden onset, so symptoms occur rapidly rather than shortly over a period of time. Wet brain causes brain lesions to form that cause issues with physical coordination and mental confusion. WKS also permanently damages the areas of the brain associated with memory, causing individuals to develop alcohol-induced dementia.

Wernicke-Korsakoff syndrome is actually made up of two different conditions that are considered two stages of one disorder. These two stages are Wernicke encephalopathy and Korsakoff psychosis.

Wernicke encephalopathy occurs first and it causes damage to lower parts of the brain, including the hypothalamus and thalamus. Then, as a result of sustained brain damage, Korsakoff psychosis occurs, which is characterized by debilitating and sometimes permanent psychological symptoms.[3] Unfortunately, since Wernicke encephalopathy is such a short-lived and sudden condition, up to 90% of alcoholics who develop it will go on to develop Korsakoff psychosis, or wet brain. 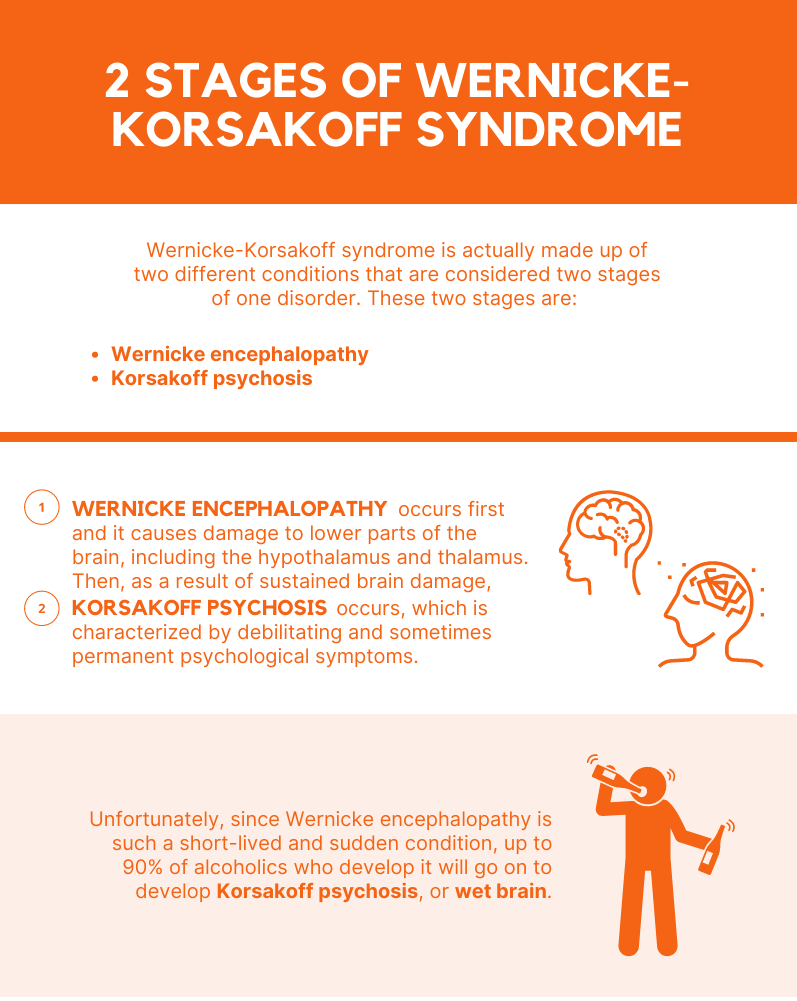 Sometimes, it is difficult to tell if a person is suffering from WKS or if they are just intoxicated, as many symptoms of WKS are similar to those of alcohol intoxication or withdrawal. Similarly, many people who develop wet brain have progressed so far in their alcoholism that they have a diminished social circle, struggling finances, or lack of access to resources. All of these factors combined result in very few formal diagnoses of WKS.

Symptoms of Wernicke encephalopathy include:

Symptoms of Korsakoff psychosis include:

Although the duration of wet brain symptoms varies depending on how far a person’s disease has progressed before they obtain treatment for thiamine deficiency, some people may experience symptoms indefinitely. However, when treated in the acute stage, symptoms such as lack of coordination and confusion may subside within days or weeks.

People who enter late-stage Wernicke-Korsakoff syndrome exhibit symptoms similar to those of dementia patients, such as difficulty with coordination and forgetfulness. These individuals may require assistance with day-to-day tasks, such as walking or moving around one’s home independently. As a result, individuals with advanced WKS rarely go to drug and alcohol treatment centers. Instead, those whose symptoms are so severe where further treatment isn’t possible require long-term care programs or assisted living programs.

When the brain is deprived of thiamine for an extended period of time, brain damage occurs in areas of the brain responsible for movement, coordination, memory, and learning. If left untreated, this damage can be permanent. However, not everyone who develops Wernicke encephalopathy goes on to develop Korsakoff psychosis. Individuals who get diagnosed and treated appropriately may not see a progression in their symptoms.

Several steps are taken to diagnose WKS. These involve:

Treatment for suspected WKS should begin immediately as this condition progresses rapidly. The overall goal of treatment is to control the current symptoms and prevent the condition from worsening. Hospitalization may be necessary in the early stages of treatment. The standard treatment for WKS is vitamin B1 injections to help improve confusion, vision, and muscle coordination. That being said, stopping alcohol use is the most important thing a person can do if they develop wet brain. Many alcoholics, once they stop drinking and get thiamine treatment in the early stage of wet brain, experience a complete recovery.

The best way to prevent and manage WKS is through preventative measures of complete abstinence. Chronic alcohol abuse combined with malnutrition can have devastating effects on the mind and body, but professional alcohol rehab centers can help you get back on your feet.

If you or a loved one are struggling with alcoholism, don’t let your addiction progress any longer. Pick up the phone and call one of our dedicated addiction treatment specialists today.