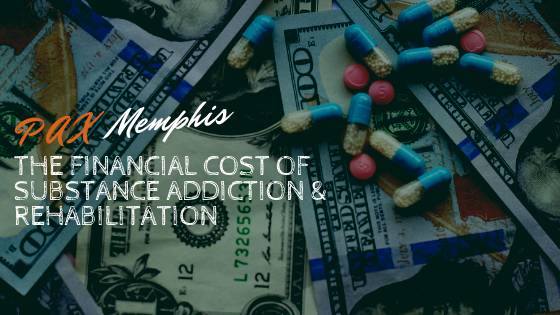 Ever felt like your ritual knock-off drink has started to cost a little too much? Maybe your need for a good time is costing you more than you would like to think about. The truth is, habits such as these have affected many of us at some point in our lives.

While we usually focus on the many health risks and social impacts associated with substance addiction, the actual cost of addiction should also be taken into account. From the daily booze run to in-patient treatment, the financial burden of purchasing a drug can weigh heavily on a person’s life. So to put this into perspective, why don’t we take a look at the financial cost of addiction compared to rehabilitation or therapy.

Upfront costs of therapy can at first seem expensive. And for a one-off purchase, maybe it is.

In some cases, 60-90 day programs are required and cost between $12,000-$60,000. These figures can seem quite costly, especially when compared to a cheap bottle of wine or subsidized prescriptions drugs. But it’s a whole lot cheaper than continuing with a lifelong addiction. When compared to the yearly cost of substance addiction the cost of rehabilitation seems very reasonable.

Alcohol is the most widely accepted substance, so it makes sense that it can cost you quite a bit over the course of a year. And if you’re anything like me, there have been periods of your life where you’ve drank more than you should have.

One of the biggest problems with alcohol, aside from its general social acceptance and ease of access, is the requirement that an individual needs to consume more and more to have the same effects. A single relaxing beer after work can quickly turn into a 6 or 12 pack-an-evening habit. Drinking a 6-pack that costs $7 every evening can cost around $2,200 annually.

And that’s just the cheap beer, where spending $60 a weekend on a night out will cost around $3,100 a year. Heavy drinkers who frequently engage in binge drinking will easily push their expenses up to $4,500 – $6,000 annually. If you swap your drinking habits for an outpatient program, then you’re bound to save thousands of dollars within the first year.

Annual Cost Of An Addiction To Cannabis: $7,000

Cannabis is one of the most widely used drugs in the US. There is an estimated 33 million regular users in America who smoke at least once or twice a month. Research shows that 9 percent of cannabis users develop dependence, with an estimated 4 million Americans meeting the criteria for cannabis use disorder.

In California, the average cost of an ounce of weed is around $200. If an individual were to smoke 4 joints a day, the annual cost could amount to $7,000. Admittedly, most cannabis users won’t smoke anywhere near this amount but it isn’t uncommon.

In 2017, it was reported that an estimated 47,000 Americans died from opioid overdoses and that 652,000 Americans suffered from heroin use disorder.

Prescription opioid addiction or dependence has reportedly affected millions of Americans. Drugs such as Vicodin, Hydrocodone, Percocet, Oxycodone or Oxycontin are commonly prescribed painkillers. Ease of access to drugs with a high risk of addiction gives these drugs the potential to cost some users literally a fortune.

The average cost of a packet of 60 Oxycontin tablets is around $200. Three tablets daily would cost a user around $3,600 a year.

But the problem begins when users can no longer fuel their habits through their doctors and regulated pharmacy prices. Many addicts will turn to the black market for their oxy fix, costing upwards of $70,000 per year just to maintain their addiction. Eventually, prescription opioid addiction will lead many users to seek cheaper alternatives, like heroin.

Drug disorder treatment, when compared to the potential cost of fuelling an addiction, is relatively cheap. And if you’d like to start saving money, then kicking your addiction to the curb is the best way to do it. Contact one of our addiction specialists today to discuss potential treatment avenues.