The Effects of Substance Abuse on the Urinary Tract

Home » Blog » The Effects of Substance Abuse on the Urinary Tract 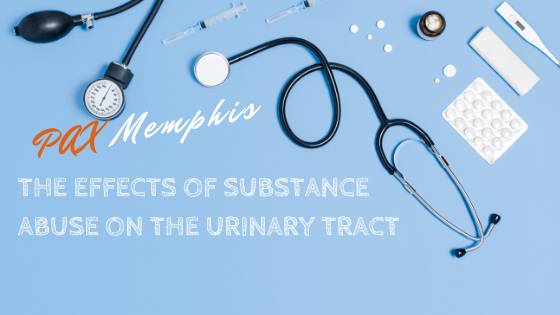 The intoxicating effects of substance abuse often lead to euphoria, relaxation, stimulation, and other short-term rewarding effects. However, substance abuse can lead to long-term damaging effects on the brain and body systems such as the urinary tract. When the kidneys are distressed, toxins often build up in the body, damaging other tissues. These complications – directly associated with drug and alcohol addiction – can lead to kidney failure and even death.

The Function of the Urinary Tract

The urinary tract is the body’s drainage or excretory, system for removing urine, which is composed of wastes and extra fluid. Located just below the rib cage, on each side of the body, the kidneys are responsible for filtering and removing waste from the body. The kidneys work around the clock and are responsible for filtering blood in order to produce urine. The bladder is located between the pelvic bones that expands as it fills with filtered urine from the kidneys. The kidneys and the bladder work together to stabilize electrolytes in the blood and prevent fluid and waste buildup in the system. The majority of drugs ingested by an individual are eventually excreted through this process.

The urinary tract can be affected by numerous factors that influence their ability to filter waste such as:

Chronic substance abuse disorder can lead to severe kidney damage and even kidney failure. Long term abuse of drugs and alcohol can directly damage the kidney, bladder, and other components of the urinary tract. These damages can lead to severe and potentially fatal consequences. There are numerous substances that can affect the function of the urinary tract, and more specifically the kidneys.

Illicit cocaine abuse can lead to rhabdomyolysis which is the breakdown of muscle tissue that poisons the blood and eventually the urinary tract. Nearly one-third of individuals who are admitted to emergency rooms with cocaine-related issues develop acute kidney failure.

Cocaine addiction is toxic to many vital organs, especially the kidneys. More specifically, cocaine addiction typically affects blood circulation throughout the body which can affect the kidneys’ ability to filter out toxins to convert to urine. These damaging effects often lead to kidney damage and total renal failure.

Opiates, including prescription drugs and illicit drugs such as heroin, are amongst the most commonly abused drugs in the U.S. This specific classification of drugs is often taken orally, snorted, and even injected. There are significant risks associated with injecting any type of drug. Opiate abusers who inject the drug are predisposed to many diseases such as HIV-associated nephropathy, which is a kidney disease that directly affects individuals who are intravenous drug users. This condition often progresses to end-stage kidney failure and even death.

There are a number of other damaging effects on the urinary tract due to opiate addiction, such as:

Ketamine is an extremely potent anesthetic that often produces hallucinogenic properties and can impair memory. Ketamine abuse often leads to severe bladder conditions such as interstitial cystitis, ulcerative cystitis, and lower urinary tract symptoms. Ketamine bladder syndrome was first documented in 2007 and is a condition in which long-term damaging effects are presented in the bladder and leads to worsening of lower urinary tract symptoms (LUTS).

Ketamine abuse often leads to shrinking of the bladder which leads to fibrosis and bladder dysfunction. Pelvic, bladder, and urethral pain are common side effects of ketamine abuse. Often times, ketamine abusers will eventually experience the appearance of blood in the urine as the bladder becomes ulcerated. Long-term ketamine abuse can be especially damaging to the functioning of the urinary tract.

Overcoming Addiction and Healing the Body

Urinary tract damage can occur rapidly due to the level of toxicity associated with substance abuse. When an individual is struggling with substance abuse for an extended period of time, it is not uncommon for the user to experience painful urinary tract complications. Long-term addiction can also lead to irreparable damages to the kidneys and bladder to a degree in which the body cannot heal. Making the decision to enter a rehabilitation program, overcoming addiction, and maintaining abstinence can prevent further damage to the urinary tract and other vital organ systems. If an individual is suffering from substance abuse induced urinary tract damage, it is absolutely imperative for the individual to enter a comprehensive treatment program that effectively addresses co-occurring medical disorders.