Understanding the Difference Between Problem Drinking and Alcoholism

Home » Blog » Understanding the Difference Between Problem Drinking and Alcoholism 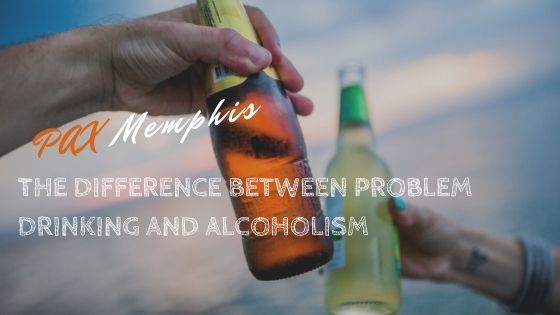 There are many different types of drinkers, including the social drinker, the problem drinker, and the alcoholic. Social drinks typically don’t have a problem with alcohol as they drink responsibly in social situations. However, there are two types of drinking that are considered unhealthy: problem drinking and alcoholism.

At first glance, it may seem like the two terms are synonymous with one another, but there are distinct differences between the two. Problem drinking refers to using alcohol in a way that could have negative impacts on one’s health, life, and relationships. On the other hand, alcoholism refers to a condition where people are physically and mentally addicted to alcohol and cannot stop on their own. If you notice that you or a loved one identify with either type of unhealthy drinking patterns discussed below, it may be time to consider seeking professional help.

Problem Drinking vs. Alcoholism: A Comparison

The primary difference between alcoholism and problem drinking is that alcoholics are physically addicted to alcohol, whereas problem drinkers are not. Problem drinkers may be able to go several days, weeks, or even months without drinking or experiencing alcohol withdrawal symptoms. Alcoholics, on the other hand, will struggle to go very long without taking a drink. When they stop drinking, they experience painful withdrawal symptoms and cravings that make if difficult to go a day or more without alcohol.

Make no mistake, problem drinking is still considered an unhealthy relationship with alcohol. That is because even though these individuals may not drink every day, they act out in destructive behaviors when they do drink. For example, they may have difficulty controlling the amount that they drink after they start drinking. Problem drinkers may binge, drink and drive, say hurtful things to their loved ones, and more. These frequent drunk episodes and dangerous patterns of binge drinking can seriously disrupt a person’s life.

Neither problem drinking nor alcoholism is an actual medical diagnosis. Instead, doctors and clinicians use a set of 11 criteria outlined in the Diagnostic and Statistical Manual of Mental Disorders, Fifth Edition (DSM-V) to diagnose drinking problems as “alcohol use disorders.” Depending on the number of criteria a person identifies with, they may be labeled as having a mild, moderate, or severe alcohol use disorder (AUD). Using a scale such as this can help addiction specialists determine the severity of a person’s drinking and which type of treatment is most appropriate.

Signs and Symptoms of Problem Drinking

Although problem drinkers aren’t physically dependent on alcohol, their binge drinking and frequent drunk episodes cause many problems in their lives. Some signs of symptoms of problem drinking include:

Even if a person’s problem drinking doesn’t seem that bad at the moment, know that problematic drinking should never be ignored. Letting an unhealthy relationship with alcohol go untreated is dangerous as it can rapidly transform into alcohol addiction, or alcoholism.

Signs and Symptoms of Alcoholism

Physical dependence and withdrawal symptoms are just two aspects of alcoholism. Alcoholics take their drinking a step further than problem drinkers as these individuals usually have consistent alcohol intake. They may be seen drinking during the early hours of the day, drinking before work, or relying on alcohol to function.

Some characteristics that point towards alcoholic drinking are:

Every person suffering from alcoholism will show varying signs and symptoms. Even though alcoholism is a progressive and destructive condition, there is hope for both people who suffer from problem drinking and alcoholism. It starts by asking for help from a professional addiction treatment center.

Depending on the type of drinker a person is they may participate in different forms of treatment. For example, alcoholics, or people who are physically addicted to alcohol, should always detox at a medical detox facility. Alcohol withdrawal can be deadly, so it is best to have medical support around. Problem drinkers, on the other hand, may not require detox. In fact, many can successfully recover on an outpatient basis.

There are two basic options for alcohol rehab: inpatient and outpatient treatment. Inpatient rehab is recommended for people with severe alcohol use disorders because this level of care provides 24/7 support and monitoring. Outpatient rehab, on the other hand, is for patients who have either completed inpatient rehab or those who do not require an intensive level of care.

The best alcohol rehab programs will provide the same quality care to all individuals, whether they are struggling with problem drinking or alcoholism. Treatment should address a person’s mental, emotional, spiritual, and physical needs while preparing them with aftercare resources and community support groups.

Get Started with Alcohol Rehab Today

Figuring out which type of alcohol treatment is right for you is not always an easy task. The best way to determine whether or not you have a drinking problem and which type of treatment you need is to speak with an addiction professional and complete a substance abuse evaluation. In the end, the terms “problem drinking,” “alcoholic,” and “unhealthy relationship with alcohol” are merely labels – and you are more than the relationship you have with booze.

If you or a loved one need help with a drinking problem, contact a dedicated treatment provider today to learn about your alcohol rehab options.