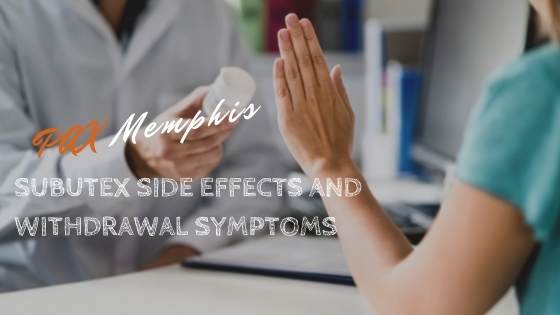 Subutex (buprenorphine) is a prescription opioid medication that is available to some patients who are trying to overcome an addiction to illicit or prescription opioids. When taken as prescribed, Subutex is generally safe and well-tolerated. However, like any other medication, Subutex has potential side effects. It can also be habit-forming and can produce withdrawal symptoms when people stop using the medication.

Here is everything you need to know about treatment with Subutex, its side effects, and withdrawal symptoms.

What is Subutex (Buprenorphine)?

Subutex comes in the form of an oral tablet that is placed under the tongue. The sublingual film then dissolves in the mouth in 5-10 minutes. Subutex is usually taken once per day.[1]

This medication is often used for the first two days after a patient has stopped taking opioids. Then, to prevent Subutex abuse, most doctors will switch their patients to a combination medication containing buprenorphine and naloxone, like Suboxone.

As with all medications, Subutex may produce side effects in some people. Most mild side effects will go away on their own after a couple of days, however, patients who experience severe reactions should stop taking Subutex immediately and speak with their healthcare provider.

Side effects associated with Subutex include:[2]

Subutex may also interact with other medications, including:[1]

Using Subutex with other central nervous system depressants can cause severe and possibly life-threatening breathing problems. Taking too much Subutex, mixing it with other substances, or abusing it by means of injection increase this risk as well as the risk of overdose.

In the event of an opioid overdose, emergency medical attention must be sought immediately.

Although Subutex is meant to help get people through opioid withdrawal, the drug itself is an opioid and can produce withdrawal symptoms.

People who take Subutex or other buprenorphine-containing medications may experience withdrawal symptoms when they stop taking their medication. While Subutex withdrawal is nowhere near as severe as most other opioid withdrawal syndromes, most physicians suggest tapering off of Subutex slowly to avoid going into withdrawal.

Similarly, people who abuse their Subutex prescription may become dependent on the drug and experience withdrawal symptoms when they attempt to quit using it.[4]

Common symptoms of Subutex withdrawal include:

Subutex usually is not intended to be a long-term treatment for opioid addiction. Instead, it is used in the short-term to help people overcome opioid withdrawal. With that said, some people don’t tolerate other opioid replacement medications well.

Some people will experience negative reactions to Suboxone or Vivitrol. In these cases, Subutex may be used at the discretion of the physician. If a patient is taking Subutex as a form of maintenance treatment, they should also be participating in a comprehensive addiction treatment program that consists of counseling, behavioral therapy, and peer support.

Since Subutex can be habit-forming, most addiction specialists will not prescribe this medication to people who are not enrolled in an addiction treatment program. If a patient is taking Subutex during treatment, they will be able to work with their doctor to set up a tapering schedule to gradually reduce their dose until they are no longer dependent on buprenorphine.

After patients stop taking Subutex, they should monitor any side effects or withdrawal symptoms they experience. They should also continue participating in therapy, 12-Step meetings, or any other activities they were previously doing to support their recovery.

Subutex is not a cure for addiction nor is it a replacement for a drug rehab program. Instead, it is a form of medication-assisted treatment (MAT) that can help patients overcome the physical symptoms of their addictions.

Physicians who prescribe Subutex do so because they believe the benefits outweigh the possible side effects and risks. If you are prescribed Subutex, it’s important to continue taking it as prescribed by your doctor.

However, if you’re struggling with addiction and think Subutex may be right for you, give us a call. Our medication-assisted treatment (MAT) program has many different clinical paths and we are more than happy to help you find the right one for you.

Call now to speak to a trusted addiction specialist.