How Long Does Methadone Stay in Your System?

Home » Blog » How Long Does Methadone Stay in Your System? 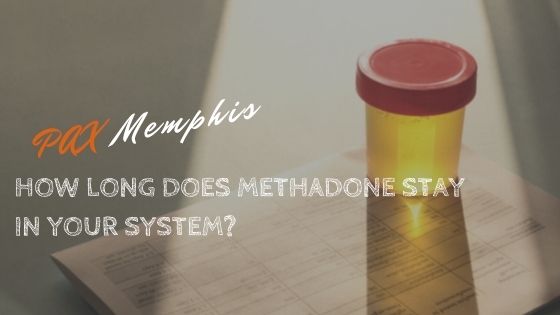 Methadone is a medication that is sometimes used in the treatment of opioid dependency or pain. As a long-acting medication, methadone stays in your system for up to two weeks after the last time you use the drug. However, there are several different factors that go into how long methadone stays in the body and for how long it can be detected on drug screenings.

The most common use of methadone in the United States is in medication-assisted treatment (MAT) programs for opioid addiction. Although methadone is typically prescribed at treatment centers, it is also used to treat people who don’t respond to other types of opioid pain medications. It is fairly safe when used correctly, however, people who abuse methadone may be concerned about passing a drug test.

Methadone is an opioid medication that helps treat pain and reduce opioid and heroin withdrawal symptoms. The drug is also available under the brand names Methadose and Dolophine and the medication is usually prescribed in tablet form. As a narcotic, the drug works by reducing the nervous system’s response to pain. This makes the medication useful in people with chronic pain who do not respond to other medications and in people struggling with opioid withdrawal.[1]

Methadone is helpful in opioid recovery treatment because it can effectively block the high produced by addictive drugs like heroin, hydrocodone, and morphine. When used long-term, the body will become dependent on methadone, so users who try and quit cold-turkey will experience withdrawal symptoms until the drug is fully eliminated from the body. On the other hand, some drug users crush and snort or inject methadone to get high. These individuals may also get addicted to the drug and suffer methadone withdrawal until the drug is eliminated from the system.

What Determines How Long Methadone Stays in Your System?

Although methadone is usually eliminated from your system after two weeks, traces of the drug found in its metabolites can remain in your system for far longer. And, depending on the type of drug test used, methadone may appear to stay in your system for various lengths of time. In addition, there are several factors that influence how long methadone stays in your system, such as metabolism, age, weight, and history of drug use.[2] Let’s take a look at how these factors dictate the length of time it takes for methadone to leave your system.

Ultimately, there is no set-in-stone answer to how long methadone stays in your system. There are too many factors at play and every individual is different.

How Long Does Methadone Stay in Your Urine, Blood, Hair, and Saliva?

There are four different types of drug tests that may be used to detect methadone in your system. While urine tests are the most common, others include blood, hair follicle, and saliva tests. Each test has a different detection window during which it will detect methadone metabolites. If a person doesn’t have enough metabolites in their body, they will test negative for methadone.

It’s important to note that these are only estimates. Each test can vary, and each individual’s body and metabolism are different, so methadone may stay in a person’s system for varying lengths of time. As a general rule of thumb, methadone is completely eliminated from the body after 14 days.

That being said, if you are concerned about passing a drug test because you have been abusing methadone, it may be time to consider seeking help from a professional treatment program. If you can’t stop methadone on your own, a drug rehab center can help teach you how.

Substance abuse can be difficult to overcome alone. Fortunately, you don’t have to do it alone. With the help of a trusted rehab center and a support group, you can recover from methadone abuse. If you or a loved one are addicted to methadone, contact us today to learn about your addiction treatment options.