The Risks of Drinking Alcohol During Pregnancy

Home » Blog » The Risks of Drinking Alcohol During Pregnancy 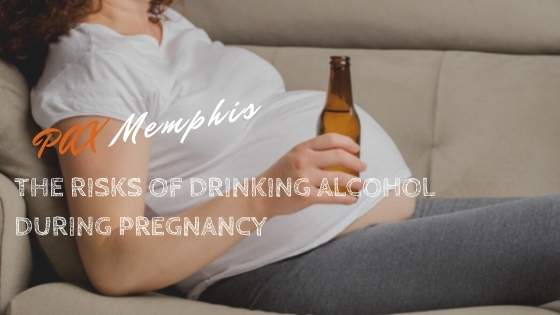 Drinking alcohol during pregnancy can put an unborn baby at risk while putting the mother’s health in danger, as well. This is why doctors and midwives never advise women who are pregnant to consume alcohol, even in moderation, until after the baby is born. While one drink is unlikely to cause detectable harm, having as much as one glass of wine or one beer on a regular basis may be enough to put unborn children at risk for an array of emotional, mental, and developmental disorders.

Studies estimate that alcohol is used by approximately 15-20% of pregnant women. Unfortunately, most women who abuse alcohol while pregnant do so because of underlying circumstances. Between 56-92% of pregnant alcohol users have a co-occurring mental health condition and up to 70% experienced childhood sexual abuse.[1] This is why it is so important for expecting mothers to have access to preventative as well as proactive mental and reproductive healthcare.

If a woman believes she may be pregnant or finds out she is pregnant, she should stop drinking immediately and refrain from drinking until after she gives birth. In an ideal world, everyone who fell pregnant would abstain from drugs and alcohol, however, this isn’t always the case. Some people who have alcohol use disorder will continue drinking throughout their pregnancy to avoid going through withdrawals. Others won’t even recognize they are pregnant in the beginning and continue drinking during the early stages of their pregnancy. Whatever the case may be, drinking alcohol while pregnant is extremely dangerous and poses serious health risks to the mother and the baby.

How Alcohol Affects an Unborn Baby

According to the Centers for Disease Control and Prevention, there is no safe amount of alcohol nor is there a safe time to drink during pregnancy.[2] Having one drink a day could be just as damaging as binge drinking. When an expecting mother drinks alcohol, it is absorbed into her bloodstream where it travels throughout the blood. Alcohol will eventually make its way to the placenta and the umbilical cord where it is then supplied to the baby. The umbilical cord is usually what delivers nutrients and liquids to the baby, but it can supply the baby with harmful substances, too, such as alcohol.

Alcohol is typically a fast-acting substance so it only takes a few hours for an adult body to break it down. However, babies need more time to process alcohol, so the substance stays in their system longer than it would in an adult, Prenatal alcohol exposure, in any amount and during any time in the pregnancy, can lead to a variety of health complications both before and after giving birth.

Sometimes, women are unaware that they are pregnant for weeks or even months. If they are drinking during the early stages of pregnancy, they may cause a lot of unintended harm to their baby and put themselves at risk for miscarriage. For this reason, anyone who is trying to become pregnant should avoid consuming alcohol.

Dangers of Alcohol Consumption During Pregnancy

There are many ways in which drinking alcohol while pregnant can affect the baby and the mother. At the same time, each case may vary and some babies will show symptoms that are identified quickly while others will experience health complications that occur later on in life. If a child was born after being exposed to alcohol in the womb, regular pediatric doctor’s visits can make sure the child is developing properly and on the right track.

Here are some ways alcohol can affect pregnancy.

Both stillbirths and abortions cause a significant amount of physical and emotional pain for the mother. The only way to prevent a miscarriage or stillbirth that is a result of alcohol is to stop drinking entirely and receive top-notch prenatal care.

Another risk of drinking while pregnant is the risk of premature birth. Premature birth occurs when a baby is born before reaching 37 weeks in the womb. While premature births aren’t always fatal, they certainly can be. Babies that survive premature birth usually do so with additional health complications and developmental delays. Oftentimes, babies who are born prematurely require intensive medical attention when they are born as well as follow-up care during their first few years of life.

One of the main causes of birth defects is alcohol consumption among pregnant mothers. Most birth defects form during the first trimester, however, they will impact how a baby looks and functions for the rest of their life. Some common birth defects that are a result of drinking during pregnancy are:[3]

Although most birth defects can be treated with proper medical care, they have the ability to impact a child’s health well into adulthood.

FAS is a serious condition that can affect a child throughout their life. Children who develop FAS have problems with development, learning, social skills, and behavior.[4] Symptoms of FAS change as a child gets older. As a toddler, they may seem hyperactive, overly friendly, or unable to follow instructions. Then, in school-aged children, FAS may look like problems reading, difficulty paying attention, and behavioral problems. As teenagers and adults, people with FAS may be more at risk for the following:

FAS that develops into a long-term condition may be referred to as fetal alcohol spectrum disorders (FASDs). Common characteristics of people with FASDs include poor concentration and memory, learning problems, speech delay, hearing or vision problems, and problems with the heart, liver, kidneys, or bones.[2] Early intervention and treatment are vital to allow children with FAS to grow up to be healthy and functioning adults as well as preventing the development of FASDs.

The best way to prevent any of these health complications is to avoid drinking alcohol entirely during your pregnancy.

If you are trying to get pregnant or suspect you are pregnant, it’s essential that you stop drinking. However, stopping drinking isn’t as easy as it sounds for everyone. Some people are addicted to alcohol and can’t stop drinking on their own. If that sounds like you, we’re here to help. With evidence-based therapies and dedicated substance abuse counselors, PAX Memphis can provide you with the tools you need to get started on your recovery. Contact us today to learn about our alcohol rehab programs.