The Dangers and Side Effects of Mixing GHB With Alcohol

GHB and alcohol are both sedative and depressant substances. When the two substances are combined, these effects are amplified and the risk of overdose and other serious side effects increases substantially. One common risk of mixing GHB with alcohol is the risk of falling victim to sexual assault, as GHB is frequently used as a date-rape drug.

GHB (gamma-hydroxybutyrate) was originally used in the late 1980s by bodybuilders. It was thought to work as a non anabolic steroid that would help enhance performance. In the coming years, it became increasingly popular and was for-sale in many health food stores, gyms, and websites. Shortly after, people became familiar with the euphoric effects of GHB, and the drug quickly became a popular drug of abuse at dance clubs and raves.

Due to the drug’s abuse potential, the drug was classified as a Schedule I controlled substance in 2000, before the FDA found some medicinal use in the drug for narcolepsy treatment, making it a Schedule III drug. Although GHB has fallen in popularity in recent years, the drug is still used. The most popular way people use GHB is by mixing it with alcohol.

The Depressant Effects of Alcohol

Alcohol is a legal and socially acceptable substance that can be purchased by any adult in the United States who is over 21 years old. Although it can be safely enjoyed in moderation, the National Institute on Alcoholism and Alcohol Abuse (NIDAA) estimates that 14.4 million adults aged 18 and older suffer from an alcohol use disorder.[1] Whether a person is a binge drinker or a chronic alcoholic, alcohol can produce devastating and even life-threatening side effects when abused.

Alcohol is a depressant, which means it slows down the body’s central nervous system. As a result, the substance can reduce body temperature, anxiety, heart rate, blood pressure, and respiration. When a person consumes alcohol, it is filtered through the liver and into the blood and can produce mild euphoric effects. In larger doses, alcohol affects regular thought processes, impairs movement and coordination, and impairs memory. As a depressant, alcohol has sedative-like effects. Despite being such a popular mood and mind-altering substance, alcohol is the most widely abused addictive substance in the world.

Gamma-hydroxybutyric acid, better known as GHB, is an illicit substance that is manufactured in clandestine laboratories. The drug is most commonly sold at raves, concerts, parties, and nightclubs. People may also refer to GHB as any of its slang names, including “liquid ecstasy,” “G,” “goop,” “grievous bodily harm,” or “easy lay.” More often than not, the drug comes in a clear and colorless liquid that is added to food or drink. It may also come in the form of a white powder or pressed tablet that can be dissolved in liquid.

GHB, like alcohol, is a depressant substance that is known to lower the inhibitions of people who take it. Users may have a heightened libido and an increased sense of connection to others. People who take GHB may experience drowsiness, confusion, and reduced anxiety. In high doses, the drug can suppress breathing and heart rate and may cause users to lose consciousness or black out. For these reasons, the drug is unfortunately used as a date-rape drug.

When used as a date-rape drug, GHB may be mixed with alcoholic beverages, producing a combination that is dangerous and deadly.

The Dangers of Mixing GHB With Alcohol

The combination of GHB and alcohol is dangerous because both substances slow down the primary body functions such as breathing and heart rate. Mixing these two substances can also have significant mind-altering effects. GHB and alcohol both impact the areas of the brain that are responsible for movement, coordination, mood regulation, memory, and decision-making abilities. Both substances increase the amounts of GABA (gamma-aminobutyric acid) and dopamine in the brain, causing users to feel pleasure, euphoria, and intoxication.

When GHB is added to an alcoholic beverage, it has little to no taste, and the sedative effects of the two substances become amplified, causing users to become more likely to get into an accident or become the victim of a sexual assault. Spiking a victim’s drink with GHB can cause paralysis, making people “easy-targets.” Elevated GABA levels may also reduce the “fight-or-flight” response, making users more likely to act out on dangerous behaviors and put themselves in risky situations. Furthermore, when mixing GHB with alcohol, people may become intoxicated faster and become increasingly susceptible to negative consequences.

Studies published in the Journal of Clinical Psychopharmacology looked at the effects of GHB and alcohol on a group of volunteers. They found that the most common side effect of mixing the two substances is vomiting. In addition, mixing alcohol and GHB is known to produce sedation, amnesia (memory loss), and life-threatening overdoses. The study also found that people who drank alcohol while under the influence of GHB experienced heightened effects from GHB and effects that lasted longer. Alcohol is thought to increase the elimination half-life of GHB by 29%.[2]

GHB and alcohol have been a major cause of many drug-related emergency room visits. When mixing the two substances together, there is an increased risk of overdose and dangerous side effects. Symptoms of a GHB overdose include:

Overdose, whether on alcohol, GHB, or both substances, is a medical emergency and should be treated as such. If you suspect someone is suffering an overdose, contact 911 immediately and let the first responders know exactly which substances are involved.

Risk of Addiction From Mixing GHB and Alcohol

Alcohol and GHB are both highly addictive substances. People who abuse them over time may become physically and mentally dependent on them. Moreover, users may lose their ability to control how much alcohol they drink, how much GHB they take, and how often they mix the substances together. As a result, people who get addicted to GHB and alcohol will experience challenging withdrawal symptoms when they stop using the substances. 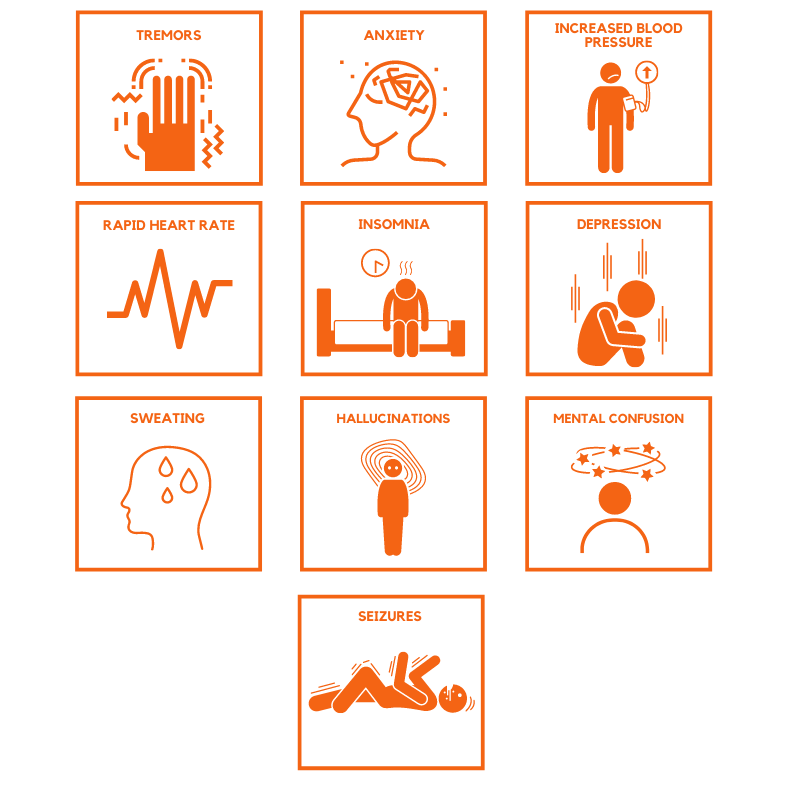 Alcohol withdrawal alone is a potentially fatal syndrome, and when both GHB and alcohol are involved, the withdrawal syndrome is even more serious. People may experience serious cases of delirium tremens (DTs) or even life-threatening seizures. In addition, users may suffer from intense and uncontrollable cravings that make stopping for an extended period of time extremely difficult.

Mixing GHB with alcohol on a regular basis will severely increase the risk of addiction and physical dependence. Individuals who are addicted to either or both of these substances should seek help from a drug and alcohol detox and treatment facility near them.

Treatment for Addictions to Alcohol and GHB

Since withdrawal from GHB and alcohol is dangerous and potentially life-threatening, the first step in recovery is to go to medical detox. Medical detox programs provide a highly structured environment where medical professionals will monitor patients, administer medications, and ensure patient safety.

In the case of GHB and alcohol withdrawal, benzodiazepines are usually prescribed to slowly wean users off of the substances. Rather than stopping cold-turkey, individuals’ brains and bodies will slowly adjust to not having the substances in their bodies.

Get the Help You Need Today

Whether you’re addicted to GHB, alcohol, or have been mixing GHB with alcohol, these substances are highly addictive and pose a serious threat to your life and well-being. Fortunately, comprehensive addiction treatment programs that offer a personalized approach can help you learn how to get sober and stay sober.

If you or a loved one are ready to stop using drugs and alcohol and begin a new way of life, pick up the phone and contact one of our dedicated treatment providers today.