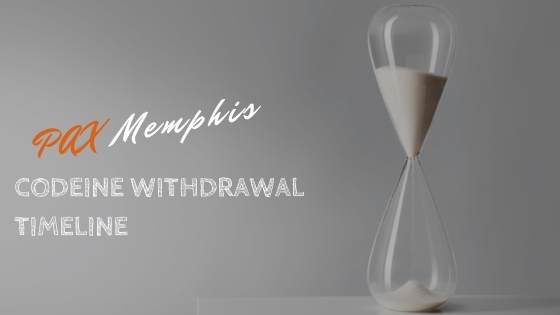 The codeine withdrawal timeline varies from one person to the next but most people will see their symptoms begin to subside after one week. Even though codeine withdrawal doesn’t last very long, the symptoms can be painful and difficult to cope with. Symptoms mirror those of the flu and are most severe during the first four days.

The safest and most comfortable way to detox from codeine is to do so at a medically-assisted detox program. Detox programs can help develop a treatment plan and an opiate taper that allows users to slowly wean themselves off of the drug. Let’s take a closer look at how codeine withdrawal works, how long it lasts, and how detox centers treat codeine dependence. 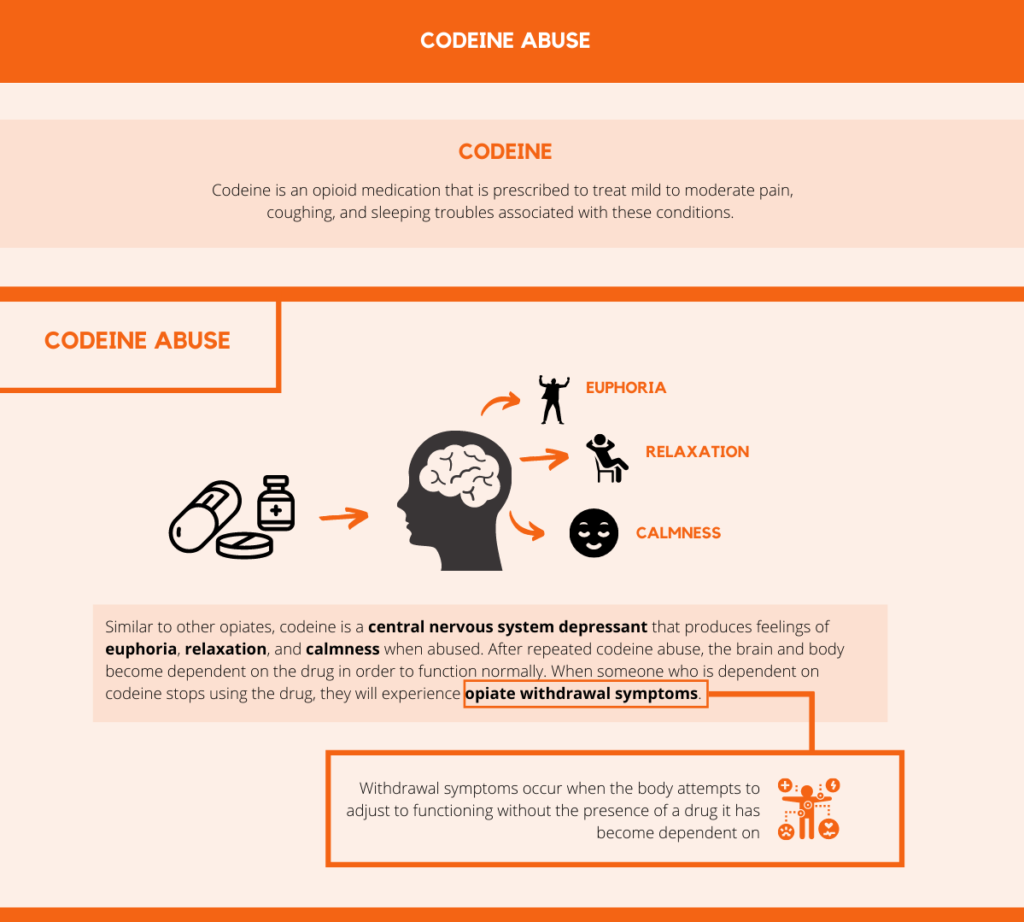 Codeine is an opioid medication that is prescribed to treat mild to moderate pain, coughing, and sleeping troubles associated with these conditions. Short-term codeine use, when taken under the close supervision of a physician, is considered safe, however, many people who abuse this drug end up getting addicted to it.[1]

Similar to other opiates, codeine is a central nervous system depressant that produces feelings of euphoria, relaxation, and calmness when abused. After repeated codeine abuse, the brain and body become dependent on the drug in order to function normally. When someone who is dependent on codeine stops using the drug, they will experience opiate withdrawal symptoms.

Withdrawal symptoms occur when the body attempts to adjust to functioning without the presence of a drug it has become dependent on. Codeine withdrawal symptoms and timelines will vary from one person to the next depending on a variety of different factors, including a person’s: 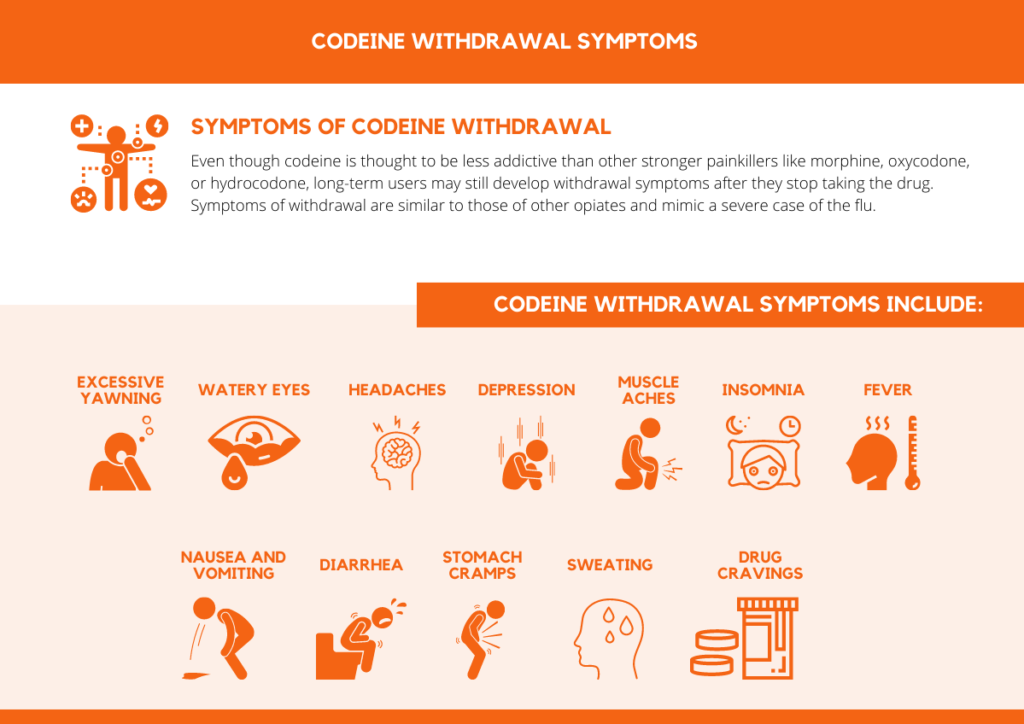 Even though codeine is thought to be less addictive than other stronger painkillers like morphine, oxycodone, or hydrocodone, long-term users may still develop withdrawal symptoms after they stop taking the drug. Symptoms of withdrawal are similar to those of other opiates and mimic a severe case of the flu.

These symptoms are usually not life-threatening, however, they can be difficult to deal with alone. There is also always a chance that symptoms will take a turn for the worst, so it’s always best to detox in a medical facility.

How Long Does Codeine Withdrawal Last?

There are several different individual factors that affect the codeine withdrawal timeline. For example, someone who has been abusing codeine on a daily basis for two years will experience more severe and longer-lasting symptoms when compared to someone who has only been addicted to the drug for a couple of months. Similarly, someone with underlying health conditions or poor liver function may also take longer to complete the detox process.

Depending on these factors as well as the rate of a person’s metabolism, codeine withdrawal usually takes about one week. Symptoms may begin in as little as 2-3 hours after a person’s last dose, peak during the first four days, and begin to subside after day five. These symptoms can all be managed at a medically-assisted detox program.

Some psychological symptoms, such as depression or drug cravings, can last for several months after a person stops using codeine. These lingering symptoms are best managed through enrollment in a drug and alcohol rehab program.

While everyone’s experience with codeine withdrawal and detox will vary, here’s a general timeline of what to expect. 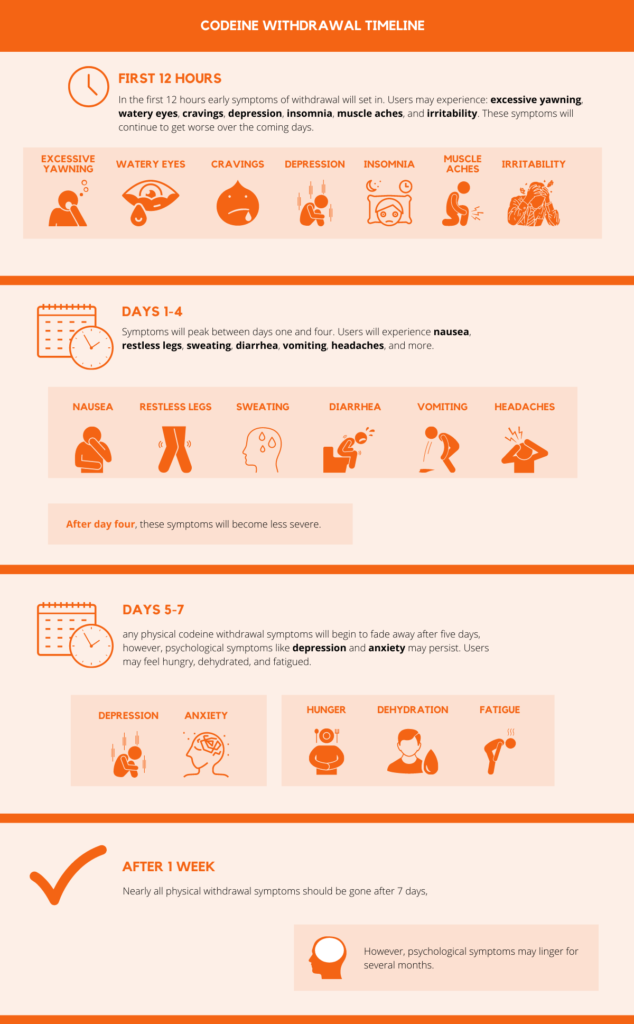 Codeine detox programs have several options for people who are looking to get sober. The first is to detox cold-turkey. Cold-turkey is a term used to describe what happens when a person abruptly stops using a substance. While this is the fastest way to detox as it doesn’t involve a taper or any medications, it is also the most painful method.[3]

Many detox programs will encourage a codeine taper. Taping involves gradually reducing the dose a person takes each day so their body can slowly adjust to a lower dose of the drug. Tapering off codeine can take several weeks or months, however, users are unlikely to experience severe withdrawal symptoms while using this method.

The last option for codeine detox involves opioid replacement therapy (ORT). ORT is the process of using opiate treatment medications, such as Suboxone, Subutex, or methadone, to help people detox from stronger opiates. These medications can be addictive if misused, so they must be prescribed and administered with caution

Regardless of which type of detox a person chooses, medical detox centers offer around-the-clock care and support for people going through drug withdrawal. They can also provide referrals to treatment providers, mental health specialists, community resources, and more.

Detox is the best and safest way to face the entire codeine withdrawal timeline. If you or a loved one are addicted to codeine, pick up the phone and contact us today to see how our detox and rehab programs can help.