Am I An Alcoholic If I Enjoy Drinking Alone?

Home » Blog » Am I An Alcoholic If I Enjoy Drinking Alone? 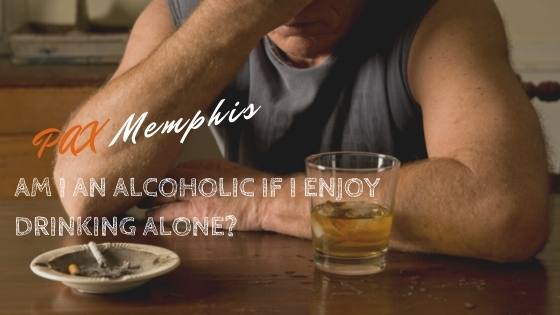 Alcohol is often viewed as a social beverage because most scenes in which alcohol is a part involve groups of other people. Just think of weddings, parties, dinners, and bars – the one thing they all have in common is groups of people. While it isn’t unusual for a casual drinker to want to unwind with a glass of wine after a long day, drinking alone can be a sign of alcoholism if it becomes excessive.

If you enjoy drinking alone, you may be wondering if you have a problem with alcoholism. However, the answer isn’t always black and white. For the most part, people who drink alone on an occasional basis and those who do not experience negative side effects do not have a problem with alcohol. On the other hand, if you are isolating, hiding your drinking from others, and are physically dependent on alcohol, you may have a drinking problem.

People who drink to become more social often drink in social gatherings with other people. They also tend to drink more when they are around other people. As a result, it’s safe to assume that most people who drink alone are doing so to cope with stress or another similar emotion.

Alcohol produces intoxicating effects that can make you feel happier and more relaxed. It may even be able to help you forget about the troubles you are facing. However, it is only able to achieve these effects momentarily, so if you begin depending on alcohol to get through the day, you may have a problem.

Drinking alone becomes dangerous if you drink too much or too often. It can also be a sign of underlying mental illness. If you are drinking to cope with anxiety or depression, you may be self-medicating and have a problem.

Besides stress, some of the most common reasons why people drink alone include:

Self-medicating is never a good idea. Although alcohol may be able to temporarily ease your symptoms of depression, anxiety, stress, or the like, it’s doubtful that alcohol can be a viable long-term solution.

Drinking as a means of self-medicating will likely lead you down a painful cycle of alcohol abuse. For example, you may drink to cope with your depression. Then, when the alcohol wears off, you will become disappointed that you feel depressed again. If you drink to cure your depression again, your brain may begin to view alcohol as a reward or a necessity. You may begin to crave alcohol any time you feel anything other than happiness. Alcohol may very quickly become your sole means of coping with life. Once this happens, it’s likely that you’re addicted.

In the long run, self-medicating an underlying condition or problem will only make that problem worse. People who drink to eliminate stress often find themselves more stressed. People who drink to deal with anxiety often find themselves feeling more anxious – sometimes over the things they did while drinking to fight the feelings that made them anxious in the first place.

In many cases, self-medication will evolve into physical and psychological dependence. If you find yourself drinking to fulfill your cravings for alcohol or to avoid going into alcohol withdrawal, you are probably addicted.

The Dangers of Drinking Alone

Alcohol is an intoxicating substance that affects the way you think, feel, react, and make decisions. Binge drinking, in particular, can put you at an increased risk of engaging in risky, dangerous, and illegal behaviors. Some examples of potentially risky behaviors include:

When you drink alone, there is nobody there to keep a watchful eye on you and make sure you stay safe. If you get the urge to drive and pick up food, there will be nobody there to suggest you order-in instead.

On a similar note, if you drink alone and have drank too much, there will be nobody there to cut you off or suggest you stop drinking. You may find yourself drinking in excess on a regular basis and developing a tolerance without even realizing it. Or, you could drink yourself into a stupor and experience blackouts, hangovers, and/or alcohol poisoning.

One symptom of alcoholism is isolation.[2] People who are alcoholics may isolate for a number of reasons. The first is that they want to hide their drinking from their loved ones because they don’t want anyone to know they have a problem. Another is that they prefer to drink alone so nobody can tell them to stop drinking. Whatever the case may be, isolating, and doing so with the intention of drinking, is a tell-tale sign of alcoholism.

Other signs that you may have a problem with alcohol include:

Find an Alcohol Rehab Near You

If you have been drinking in excess or alone, you may find it difficult to reach out to someone you love for help. Sometimes, especially if you are someone who isolates, it’s actually easier to reach out to a stranger. If you find yourself in this situation and you think you have a drinking problem, pick up the phone and call one of our addiction counselors today.

We can offer you an obligation-free phone call to determine whether or not our Memphis alcohol rehab program is right for you. And, if it’s not, we can refer you to somewhere that is. Don’t wait any longer – call us today.